The Importance of Performance Conditions 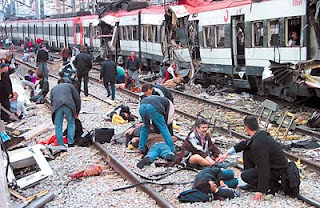 The International Association of Conference Interpreters (AIIC) runs a well-maintained website, but its content is produced by and addressed to Expert Interpreters, so it's usually outside the scope of this blog. However, there’s a report currently posted there that has an implication for all interpreting.

If conditions are poor, the effect will be at the very least more stress on the interpreters, and inconvenience for the listeners. In posts about the Shafia hearing in Canada last year [you can find them by entering shafia in the Search box at top right], I quoted a crime reporter's description: "A sound-deadening booth that was dubbed the garden shed by lawyers was erected near the prisoner's box..." In other words, a temporary booth of a kind that is 'sound-deadening' but not soundproof; so that the interpreter's voice can be heard by people nearby, which is distracting for them. At the extreme, the conditions may render interpreting impossible.

The report I'm quoting now is of a far more VHP (Very High Profile) trial, with the presence of foreign as well as domestic press. Indeed the crime that gave rise to it was so high profile that its repercussions brought down the Spanish government.

"On 11th March 2004, bombs which had been placed on commuter trains in Madrid exploded during the morning rush hour, killing 191 and wounding over 1500 people in what was one of the worst terrorist attacks ever to be perpetrated in Europe. The attacks were attributed to Islamic extremists, arrests were made and the trial took place from February to June 2007. Given that many of the 29 defendants and some of the 650 witnesses were native speakers of Arabic and Berber with a limited or no command of Spanish, interpreting was required throughout the proceedings."

Due care was taken in selecting and preparing the interpreters:

In this last respect, those responsible had done better than at the Shafia hearing, where insufficient attention was paid to the difference between dialects of Farsi.

But there's the rub. The interpreters were used to simultaneous interpreting; not, however, the court administration, who were ignorant of the technical conditions needed for it. Chaos ensued.

"From the first day, problems became evident. Although great financial investment had been made in equipment for simultaneous interpreting, headphones had only been purchased for the non-Spanish speaking defendants, enabling them to follow the interpreting into Arabic. The interpretation of their testimony into Spanish for the court was broadcast through loudspeakers in the courtroom. The disadvantage of this system was that the interpreters not only heard the voice of the defendants and witnesses that they had to translate, but they also heard their own interpretation through the loudspeakers in the courtroom which was picked up by defendants’/witnesses’ microphone and fed back into their headphones.
Obviously such a system is totally inadequate and extremely off-putting for the interpreters, making their already difficult task almost impossible. One may wonder why indeed they carried on and did not stop the proceedings until the sound problems had been resolved. This possibility was indeed discussed but ruled out at the time, given the tremendous expectation surrounding the trial, particularly on the first day of the hearings. There was an atmosphere of great tension as all public attention in Spain and indeed in many other countries was focused on this trial, with the presence of more than 400 journalists from all over the world, live television coverage and webcast, the presence of victims and their families and over 50 lawyers. The interpreters decided to carry on, adapting their technique by lengthening the time lag between what they heard in Arabic and their rendering in Spanish, which meant that they were not, strictly speaking, interpreting in the simultaneous mode.
By the afternoon, tension was running high and the presiding judge began to make critical comments about the interpreters: 'The interpreters are not having a very good afternoon'… 'I want simultaneous interpreting, not successive [sic] interpreting'. He finally suspended the hearing, demanding to see the interpreters immediately in his office. These scenes were broadcast live on Spanish television and gave interpreting a very visible profile from day one of the trial, although, unfortunately for our profession, the judge’s disparaging comments and unjustified criticism of their performance did not portray the interpreters’ work in a very favourable light.
Like the judge, the general public is not familiar with the technical requirements for simultaneous interpreting and was unaware of the extremely difficult working conditions the interpreters had found themselves in. These sound problems were partially solved as a result of the meeting between the interpreters and the judge, and the latter subsequently apologized for his comments and grew to greatly appreciate the work done by the interpreters. This evolution, however, was unbeknown to the general public and the media, whose opinion remained coloured by the public comments made on that first day in court. It is interesting to note that AIIC was among the professional organizations and colleagues who publicly spoke out in defence of the interpreters in the media."

Poor conditions had not rendered interpretation completely impossible, but had come very close to it. In this instance, the interpreters were Expert Interpreters and the context was VHP. In true Natural Translation, the conditions may be uncontrollable because the translation occurs spontaneously. However, in all the more sophisticated forms of interpreting, the principle of providing adequate conditions cannot be ignored without penalty. I hear there's a new European Union code of court interpretation in the works. Hopefully it'll have a section on technical and working conditions.

Photo: tomdiaz.wordpress.com
Posted by translatology at 9:46 AM