My Pilgrimage to Bletchley (conclusion)


This post is the conclusion of the preceding one, which please read first.


Japanese
When I was a student at the School of Oriental and African Studies (SOAS) in London in the late 1940s, my best friend was a linguist named Peter Judd. He was a Natural Bilingual: mother French, father English. But his mother had died while he was very young and he'd been educated in England. So his English was dominant and he'd also learnt the usual grammar school languages: French and Latin, and perhaps Greek or German. By the time I met him, he was doing a PhD in phonetics under the influential linguist J R Firth. But during WWII he was called up for service in the Royal Navy. However, to his surprise, the Navy didn't send him to sea; instead it sent him on a crash course to learn Japanese. He never told me what he did with his Japanese. In the 1940s and for long afterwards it was still secret. Now, at BP, I began to understand.

"After Pearl Harbor… the need for Japanese linguists for military and intelligence work became acute… The War Office [which had previously refused funding for Japanese courses] clamoured for Japanese speakers and SOAS set up a special course for grammar school boys in their last year at school… But SOAS was bombed and the course did not start until May 1942... They also ran a 10-week course in Japanese radio signals."

I used to think that all the work on breaking the Japanese codes had been done by the Americans. While the Germans were developing Enigma, the Japanese had been developing their own machine for their diplomatic codes. The US Army code-named it Purple. The Americans broke into its code by 1940, and the intelligence obtained from it, which they called Magic, became the equivalent of the British Ultra. However, the Japanese used many more totally different codes and ciphers than the Germans during the course of the war, probably 55 in all. The most important of them operationally was their naval code JN25. It was decrypts of JN25 that enabled the Americans to prepare for the Battle of Midway and to shoot down Admiral Yamamoto's plane over the Solomon Islands – this last exploit a terrible blow to Japanese morale.

But the British too worked on JN25, and Hut 7 at BP also had a section that worked on Japanese Army Air Force Codes. The British had their own reasons. Large pieces of what was then still the British Empire lay in the Pacific theatre of war. Thus it was JN25 decrypts that gave them warning of a Japanese attack on the British fleet at Colombo, which was intended to be another Pearl Harbor.

"HMS Anderson was the Intelligence Unit of the Eastern Fleet's Headquarters at Colombo, linked to Bletchley Park. They were working one sultry afternoon in Colombo on a message that described plans for a massive attack somewhere. Then they spelt out the name of the place that was to be clobbered – KO-RO-N-BO. An electric shock ran through the up-to-then relaxed office."

Admiral Somerville moved his fleet out of Colombo in time. 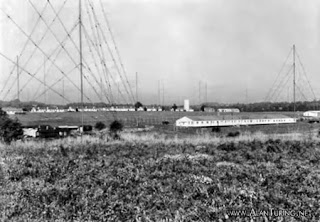 Most of the enemy communications traffic was transmitted by shortwave radio. That was the Achilles heel that made it possible to intercept it. But shortwave has serious limitations, not only in its geographical range but also because its quality varies according to the time of day. To maintain constant surveillance, many radio monitoring posts were needed and some of them had to be moved around as the Japanese advanced. Thus, as we have just seen in the Colombo example, BP was more than BP itself. It was the coordinating centre of a far-flung web of outstations and listening posts. There was more to BP than meets the visitor's eye.

Having absorbed as much as we could of BP in one day, we pilgrims retired to a good meal at the Three Trees in Milton Keynes. It's typical of a current trend in England: an old pub turned comfortable restaurant. Seventy years on and no reminder of the astute heroism we had been witnessing down the road. To sum up, if you're in London with a day to spare and you're interested in the history of cryptology, computers, translation or WW2, don't miss Bletchley Park.

Image
Flowerdown, Hampshire, UK listening station. It was linked to BP and was bombed twice in one week.
Source: www.alanturing.net
Posted by translatology at 5:01 AM 2 comments: 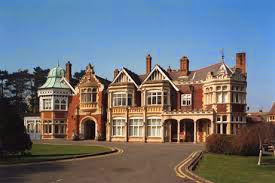 On my way home from Dublin to Valencia I stopped off in England. There the help of a younger relative enabled me to fulfil a long-cherished ambition. It was to make a pilgrimage to Bletchley Park (BP). BP is one of the places where programmable electronic computers were invented as a by-product of the Second World War (WW2). It is also where the father of computer science, Alan Turing, worked during that war. I saw his office, now stripped bare, and the little house in the stables area where he also worked. One guesstimate has it that the work accomplished at BP shortened the European war by two to four years and that without it the outcome would have been uncertain.

BP is at Milton Keynes, about an hour by car or by train (from Euston station) north of London. It was originally a fine country mansion in its own park before it was taken over by the British government for its Government Code and Cypher School (GC&CS) on the eve of WW2. For a long time the work done there was kept secret even after the war. Churchill didn't want the Russians to know about it. He even had its early computer, the Colossus, dismantled; though a replica has been rebuilt in recent years and is on view. Like many others, I first learnt about it with the publication of Winterbotham's book The Ultra Secret, in 1974 (see References). Since then numerous other books and articles have been published about it, Nevertheless I learnt many things on my visit and had some surprises. Here are my impressions.

Scale
Clearly BP needed a large and varied staff of cryptologists, translators, engineers, etc. However, the way the temporary wartime 'huts' were disposed throughout the grounds without ruining the park-like environment makes it difficult to imagine. In fact "in January 1945, at the peak of codebreaking efforts, some 9000 personnel were working at Bletchley." They used some 400 teleprinters. One wonders where they put them all.

Preparedness
The fact that the BP site was taken over on the very eve of the outbreak of war might lead one to think that the British were poorly prepared for the cryptology tussle. There was, however, a long continuous history behind it that went back to the First World War. The GC&CS began in 1919 in a room, Room 40, at the Admiralty in London. Three outstanding personalities symbolise its continuity. One of them was Commander Alistair Denniston, who was its operational head from 1919 to1942. As such he initiated and supervised the move to BP. It was also Denniston who realised that the enemy's use of electromechanical cipher machines meant that formally trained mathematicians would be needed to decode them. Another was Dilly Knox, a papyrologist who turned cryptographer back in Admiralty days and became BP's head cryptographer until his very untimely death in 1943. And the third was none other than Winston Churchill, who was First Lord of the Admiralty when Room 40 was established in WW1 and continued his support as Prime Minister into WW2. When a group at BP complained about insufficient resources, he wrote a typical minute on their letter,


"Action this day make sure they have all they want on extreme priority and report to me that this has been done."

Enigma and Lorenz
Enigma is the German coding machine that everyone has heard of. It had a long history, starting as a commercially available device in the 1920s. However, the German army also came to have another, equally important machine, the Lorenz. It was important because once it was brought into service in 1942, it was used for high-level communication between the German High Command in Berlin and army commands throughout occupied Europe. It was therefore imperative to do the reverse engineering of it. BP cryptographers succeeded in deducing its workings without ever having seen one; which has been described as "one of the greatest intellectual feats of World War II." So I learnt at BP to distinguish between the Enigma and the Lorenz, each with different workings and a different target.

Between the wars: the Poles
One of the surprises at BP is the monument to three young Polish cryptographers.

The first to discover the wiring plan of Enigma were not the British but the Poles. The Polish equivalent of GC&CS was already intercepting German Enigma traffic throughout the period 1930-1938. In 1928 an alert Polish customs officer had intercepted an Enigma that was being shipped to the German embassy in Warsaw, and that enabled the Polish Cipher Bureau to examine it. A team of brilliant mathematicians was recruited at Poznan University to work on its cryptology. Most of their work was based on a branch of pure mathematics known as permutation theory. They succeeded, and in 1938 they made a generous gift of their findings to French and British delegations. The British one included Turing and Knox. Their contribution to the British side of the cipher war was invaluable.

The translators
Once the wireless traffic was decrypted, it was still in German. For it to be useful to British intelligence, a large staff of specialised German to English translators had to work in shifts around the clock. There were nothing like enough Professional or Expert Military Translators available to meet the demand. But fortunately there was a good supply of Advanced Native Translators, because German language and literature was still widely taught in British secondary schools. (That's how I learnt it myself, even while the Germans were bombing us!) So graduates from the 'grammar schools', having learnt one foreign language and probably more, were considered prime candidates for further training.

The situation was not so favourable for other languages except French. Among the languages needed was Italian. Though the use of Italian was not comparable to that of German, it was Italian decrypts that enabled the British to win the Battle of Cape Matapan in 1941. The British fleet commander came personally to BP to thank the cryptographers.

The Bletchley Park Reports are available on site at BP.

There are good videos, some of them complete BBC documentaries, about BP on YouTube.