Long-time Followers know that my second major interest after Natural Translation is Machine Translation. An apparent contradiction, but I have explained elsewhere how this came about many years ago and led me to become a member of the International Committee on Computational Linguistics or ICCL. (For more, enter ICCL in the Search box on the right.)

The ICCL sponsors the biennial COLING conferences in a different part of the world each time. The last COLING took place in Dublin in 2014. The upcoming COLING is scheduled to take place in Osaka, Japan, from December 11 to 16 of this year.

The latest news is that a record number of papers have been submitted: more than 1,100. Of these, 93 are specifically about MT; and many that are listed in other categories are relevant to it; for example speech recognition, which is now linked to translation in systems like Skype. So if you're passionate about MT and ways to improve it, Osaka in December is the place to be.

It's a tradition of COLING that one day of the conference is taken off for an excursion to help participants get to know each other. This time the excursion will be to Nara.

The website for COLING Osaka is at http://coling2016.anlp.jp/ or click here.
Posted by translatology at 12:29 PM 2 comments: 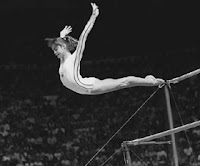 I don't normally talk about my professional interpreting career on this blog, but today merits an exception. It's the anniversary, the 40th anniversary, of what for me was an unforgettable moment. And paradoxically it happened to me because at that very moment I was not interpreting.

It came about this way. In the summer of 1976 I was recruited to the large team of 60-odd conference interpreters who serviced the multitude of press conferences, committee meetings, etc., that accompanied the Montreal Olympic Games just as they always surround the Olympics. The public isn't aware how much of these activities goes on. I consider it was the high point of my career as an interpreter. I got the job because I had previously done work as a freelance interpreter for the Canadian government, I moved for a month into one of the apartments that were provided for us at great expense in Montreal and commuted most days between morning press conferences in the city and the afternoon equestrian events at Bromont, Quebec.

But at the very start of the games, just before the opening ceremony, we interpreters discovered a serious mistake had been made. Everyone on the staff of the games was issued with an identity tag to wear around their neck; it bore their photo, their name and their function. You had to show it to get to work. No tag, no admission. However, the people in charge had forgotten to prepare tags for the interpreters. Panic! In desperation, the official responsible issued an order: "We have press tags left over. Issue them all press tags." And then he was so busy that he forgot to ask for them back.

The unintended result was that the interpreters could get into the press enclosure at any event merely by flashing their identity tags. It was too good an opportunity to miss.

One evening, back from Bromont with no interpreting to do until the following morning, I walked up St Catherine Street to the Montreal Forum. The Forum is usually Montreal's premier ice hockey arena, vast, but it had been taken over for the Olympics. That evening it was hosting the gymnastics. I flashed my tag and eased myself into the front row of the press enclosure.

I had arrived just in time to witness history in the making. Between the spotlights and the camera flashes, and from a distance of barely 30 metres, I saw dainty, diminutive, precise, untrembling Nadia Comaneci, 14 years old, make her perfect score of 10. The first perfect score in Olympic gymnastics. As we onlookers stopped chattering, she, as she says in her BBC interview, was thinking only of what she had to do next. Her event barely occupied a quarter of the floor space but it was the corner nearest to where I was standing. I was there too when, to the initial bewilderment of the reporters and the crowd, the board flashed up 1.00 because it hadn't been designed to display 10.00.

Posted by translatology at 8:51 AM 2 comments: 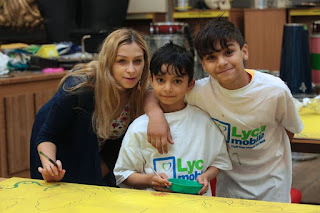 Followers of this blog are familiar with the Young Interpreters movement in UK schools. If you aren't, enter emtas in the Search box on the right. EMTAS channels the abilities of school children to act as language brokers for immigrant fellow pupils. The June issue of the YI Newsletter brings the usual cheery reports of success and expansion. Pupils at Hylands School in Chelmsford, which has just joined, express their feelings:

"I feel happy that I am a Young Interpreter as I can help out people who are struggling with English and who look lost around the school. - Paige, year 11.
"I think being a Young Interpreter is about putting the EAL student first and not myself. I am very excited about joining the Young Interpreters because I will meet new people and help them to understand what it is like to be at Hylands. Also I am a little nervous because I have never done this before. My mum says I would be excellent for this because I am a natural carer for others and will help in any way possible. - Mia, year 7.

And so on. Notice that these children see themselves as more than just language conduits, and such empathy is perhaps typical of Natural Interpreters. Our Followers are familiar with such sentiments. However, this issue of the newsletter also contains what for me anyway was a surprise, and I urge you to look at it via the link provided or by clicking here. It is that among the dozens of nationalities in Hampshire schools there are now Roma children. Do you know who the Roma are? EMTAS answers the question, insisting that they are not Gypsies.

"Most Roma families prefer to identify themselves by their country of origin, Poland, Czech Republic, Slovakia and Romania being the most common ones. They do this because of their fear of discrimination and prejudice.
"The linking of 'Gypsy' and 'Roma' in adscription documents is an unhelpful pairing as many Roma do not want to be allied with Gypsies. Their adscription as 'White Other' (WOTH) or 'Any Other Ethnic Group' (OOTH) means that Roma children in Hampshire schools do not receive support for their Roma background and all the cultural barriers to learning…. We need to be aware that many of these children will have no formal experience of schooling or a very interrupted education. Many find it difficult to settle in one area and are at risk of becoming 'lost in the system' because of their relatively high mobility. We should also be aware that our Roma communities are themselves diverse in terms of language, culture and religion (they may be Roman Catholic or Muslim, quite different from our indigenous Traveller groups)…
"Roma do not regard themselves as Gypsies and do not like to be classified as Gypsies although many of their customs are similar. European Roma call their language Romanes and UK Gypsies call theirs Romani. Whilst English Romani and European Romanes have vocabulary in common, the grammatical structures used may vary considerably and the languages are not necessarily mutually intelligible.
"It should be noted that although many of Hampshire's Gypsies and Travellers have a predilection for living in caravans and mobile homes, many Roma… have always lived in housing,"

Image
Roma community development worker Alexandra Bahor who is working with Roma children in the Lodge Lane area of Liverpool on an arts project in a bid to promote cultural cohesion in the neighbourhood.
Source: Liverpool Echo

Posted by translatology at 2:21 PM 2 comments: