Correction: The Oldest Depiction of an Interpreter 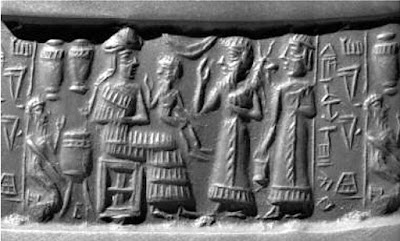 One of the most popular posts on this blog has been the one of 5 July 2010, because of its photo of a detail from the the magnificent Haremhab Frieze. The post has been viewed by more than 5,000 readers. The frieze, which is now in the Royal Antiquities Museum in Leiden, Holland, dates from about 1,330 BC and shows an interpreter for one of the Egyptian pharaohs in action. If you haven't seen it, you can do so now by entering frieze in the Search box on the right.

The title and text of the post proclaimed that it was the earliest known depiction of an interpreter. But now a Hungarian reader, historian Kata Aklan, has written with proof that it's not so. I thank her for the correction. She says,


"The earliest image of an interpreter is that of Shu-Ilishu, an interpreter of the Meluhhan language (generally held to be a language of the Indus civilization) from ca. 2020 BCE."

That's a significant difference that pushes the record back 700 years. Furthermore she provides a link that leads to an image from the interpreter's cylinder seal as well as a key article by an American expert on the Indus Valley civilisation, the late Gregory L Possehl (see Sources below).

Some words of explanation. Meluhhan was indeed a language of the civilisation that flourished along the valley of the Indus river in what is today Pakistan. The greatest cities of the civilisation were Mohenjo-Daro and Harappa. So far Meluhhan has only been partly deciphered because of a lack of bilingual texts that could serve as a 'Rosetta stone'. However, Shu-ilushu's seal is not from there but from another culture, the contemporary Late Akkadian civilisation of Mesopotamia (roughly today's Iraq). The characters on the seal are therefore not in Meluhhan but in a better-understood Akkadian language: Sumerian cuneiform. It's known that there was a Meluhhan village called Guabba in Ákkadia, which would explain the need for an interpreter. An alternative explanation might be that he was needed for mercantile exchanges, for the Harappans are known to have traded widely by sea. From thefact that he had his own seal, it would seem that he was a professional.

The story of the modern provenance of the seal, as told by Dr Possehl, is also fascinating. It turned up in a collection of antiquities called the Collection Le Clercq.


"Gathered together in the 19th century by a wealthy man, this collection is composed of objects purchased from dealers with little, if any, provenance data presented. Therefore, we do not know where Shu-ilushu's cylinder came from."

But we do know that the Le Clercq collection found it way into the Louvre in Paris. Then it happened that in the spring of 2004 some objects from the collection were sent on loan to an exhibition at the Metropolitan Museum of Art in New York. It was there that Possehl spotted it and had a better rollout made from it than the one previously available in Paris.

Notice that on both the frieze and the seal the interpreter is a much smaller figure than the main personages, signifying a servant status. As for the Haremhab Frieze, it's still, as Kata says, the second oldest depiction. Haremhab and Shu-ilishu both illustrate the universality of translation over time.

(It's a pleasure and a privilege to start off the New Year with a contribution from a distinguished literary translator. Like so many literary translators, Prabha Sridevan is a Native Translator (i.e. self-taught); she is a retired judge of the Madras High Court at Chennai, southern India She translates from Tamil for the many Indians whose language is different and who like to read in English. She is representative of the busy translation milieu in India about which we hear little in the West.

I got to know Prabha through her translations of short stories by the Tamil authoress R. Chudamani. Her post fits in well with what was written in the post of 28 November on this blog about Translator's Affinity. Scroll down to find it.)


I wandered into ‘translation’. I did not know it had a technique; or that it was both a science and an art. I had finished reading a collection of short stories in Tamil by Chudamani, a prolific and very sensitive writer. She had died a few months before and the book was released at a memorial function. I could not let her go, she clung to me not like one of those mythical demons who grip you from behind, but more like a gentle fragrance. A friend’s casual comment made me sit down to transfer Chudamani from Tamil to English. And she did not leave me. I had read somewhere that the translator’s job is “not a word more not a word less.” That was the only rule I had before me. But it was not possible. Tamil was sometimes more frugal than English, sometimes it went on a word orgy. “Vandaan” is a single word which tells us that a man came and if located in a context could even tell us where he came to. We have a word to indicate if the person who came was to be respected and that is “Vandaar”. To the familiar ears even a person’s name will indicate the class and caste. How do you transport one’s social history to an alien tongue with the stroke of a pen or tap of a key, as it happens? I did not try. I hoped that the strength of my writing would convey the essence. At that stage I was not thinking of publishing at all. Indian languages do not have capital letters, not at the beginning of a sentence and not for proper nouns. I wondered why. I asked Dr. Prema Nandakumar a scholar of many languages. She mischievously asked me “Prabha , is it linguistic democracy?” Was it? We Indians are the most class-conscious and caste conscious people, even the way we speak reveals our identity. The accents, the minor differences in words are all keys to who we are. How then did we endow our letters the gift of equality while writing? I naively hoped it meant that when we started writing these divisions were not there and then they were built brick by brick, word by word accent by accent. But I am sure I am wrong. Tamil writing is sometimes flowery. The same tone does not work in English. So not a word more was not a good guideline, as my dear editor Mini Krishnan told me right away. She said Prabha must come through the words. I thought that the translator must know the source language and the target language. I only knew I was wrong when I read the recent blog post about Pound’s Cathay. I realised I had harboured so many misconceptions about the art of translation.
Now I will go to the writer. I almost felt Chudamani’s presence while I wrote. I have written about it in my Translator’s note to Seeing in the Dark. It felt like I got into her skin, a kind of transmigration of soul. Sometimes I knew she did not approve of that particular word. But the advantage with translating her was that both of us were similar in many ways, the caste, the class, the social background, the same city and of course we were both women. Both of us could write in English and Tamil. Did this make my debut easier? I then translated three short stories by Seetha Ravi, who is in many ways like me too. These were published online and that’s how I entered the word of “Unprofessional Translation” and got introduced to Brian Harris. Seetha’s style was totally different from Chudamani’s, but still we were similar. Translation is like acting. We have to understand the “other”, the character who we are portraying and only then it will work. Many years ago I acted in a play by Maria Irene Fornes and directed by Prasanna Ramaswami. I was the maid. In India we use the word “servant”. But after that I stopped using that word. During rehearsals I realised I had to stand while she sat. It changed me forever. As a judge too, I had to "step in the other’s shoes," to quote Justice Claire l’Heureux-Dubé of the Supreme Court of Canada. Translation is also like that, I think. Sometimes I found my eyes wet while translating a story. It is different from reading. You are there in that situation, in that space, in a more immediate way when you are translating. I wept again when I did the first correction and again when I sat with my editor. I had to know if it would be the same if the source was written by a person very different from me. Did I take the easy route, by choosing women like me? So I chose two writers, different from me in every way, though one is a woman. Both the stories caught me in their hold. It was clear I was hearing a different voice. It was interesting. The writers were sharing insights into unfamiliar lives, lives I would not have known from the inside if I had not translated the stories. I have sent one of them to a journal. How readers like it will be proof of how authentic and true my voice sounds. A reader who can speak Tamil but can’t read told me after reading my translation, that he felt he was reading Tamil. Then the tone and the feel have transmigrated into the target language. Chudamani must be smiling.


Reference
R. Chudamani. Seeing in the Dark. Translated by Prabha Sridevan. New Delhi: Oxford University Press India, 2015. Available from Amazon and other booksellers. A collection of short stories with translator's introduction.
It was adapted for the stage and performed by The Madras Players in 2016.
Posted by translatology at 1:55 AM 56 comments: