A bit belatedly – for we are already at the end of March – a conference has been announced for early October on the topic that occupied our first two posts this year, namely the centenary of professional conference interpreting. (To retrieve those posts, enter centenary in the Search box on the right.)

It’s fitting that the venue is Geneva, where so much of the early development of the profession took place at and around the League of Nations between the two World Wars and the prestigious training school was established in  1941. It’s appropriate too that one of the keynote speakers is to be Jesús Baigorri, formerly of the United Nations and the University of Salamanca, who is the leading historian of that period.

At the opposite end of the spectrum of professionalism comes NPIT5.

Long-time Followers of this blog may recall our posts on the earlier conferences in this series, which which was founded by Rachele Antonini and her team at the University of Bologna in 2012.To retrieve them, enter NPIT in the Search box. I’m glad to see Rachele is on the Advisory Board for this one.


By reaching a fifth edition, this conference comes one step further to bringing NPIT into the mainstream of translation studies. Thesis students, take note. 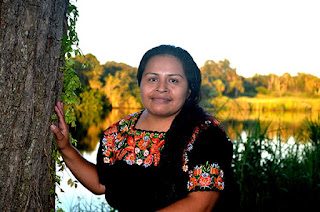 Followers of this blog will know that our model of translator competence is a developmental one, starting from the untrained Natural Translation on which it remains dependent. To remind you, here is a diagram of the model reproduced from a post of 2010. 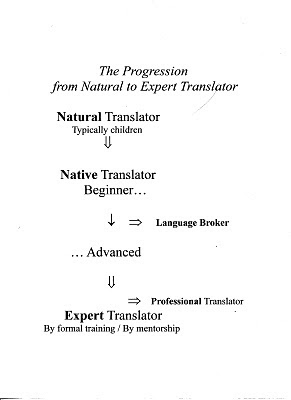 It is interesting to follow this progression in the life of a Nicaraguan interpreter, Carmelina C. (Our added emphasis in the quotations.)


"I was born in Aldea Coya, a village about 30 minutes (by car) from San Miguel Acatan, Huehuetenango, Guatemala.  I am a Maya Akateka [English Akatek] woman…  I speak Akateko and Q’anjob’al fluently, and some Chuj. My family came to the United States when I was just six years old, searching for freedom from the war in Guatemala."

Akatek and Q'anjob'al are closely related but are recognised by linguists as distinct languages. Chuj is also related but has a marked tendency to borrow Spanish words. Since the family emigrated when Carmelina was only six, she was fluently bilingual from infancy, and even trilingual in a third language. The linguistic load doesn't appear to have done her any harm; on the contrary her mastery of several languages was to prove very advantageous. (Incidentally we may reflect how her family's flight shows that the conditions which have led to the present caravans at the US border are far from recent.)


"I learned English in school and taught myself Spanish at the age of nine. As I was growing up, we moved to different states across the U.S. because my mother was a migrant worker.  This is how I was exposed to the different languages spoken by my people from Guatemala. "

She doesn't say that she was taught English at school, so maybe she taught herself English as she did Spanish or she just picked it up. Notice that she learned Spanish in the US, which is an indication of how prevalent and influential Spanish has become there.

Now we come to the beginning of her translating.


"I began interpreting at a very young age because my mother needed me to interpret for her.  I remember interpreting and negotiating her work contracts when I was just eight or nine years old.  Even as a teenager I did a lot of interpreting for our family friends."

This was a typical experience for a Child Language Broker. Her mention of "negotiating her work contracts"  illustrates how the brokering involves more than merely translating.


"In 2002, I was actually interpreting for a family friend when I was discovered by Berlitz (a global leadership training and language education company).  I was tested, certified and then given the opportunity to do immigration court interpreting as a contractor.  I have been interpreting professionally since 2002."

So by 2002 Carmelina's practical experience had taken her to the level of Advanced Native Translator, still uncertiified. It's no accident that she was spotted, recruited and professionalised by the Berlitz organisation. In 1970 I myself was given my first job as interpreter by Berlitz – Berlitz Montreal; and Berlitz has a busy office where I now live in Valencia, Spain. Berlitz is famous for language teaching, but few people realise how important it has been in the private sector translation and interpreting market. The Wikipedia article on the Berlitz Corporation doesn't even mention it.


"I was inspired to become a [professional] Interpreter by the needs of those around me.  No matter where I was, there was always someone that needed my help, especially because the languages I speak are rare and there are very few Interpreters."

Carmelina points here to the enduring problem of finding interpreters for what UNESCO calls "languages of limited diffusion." In this age of mass travel and migration, the diasporas of these rare languages are widely spread. And as we know in Canada, each wave of hardship or repression in one part of the globe produces a new and unexpected language demand in another.


"I am proud to bring a strong sense of cultural awareness to every session I interpret for.  It is extremely important to be knowledgeable and up-to-date about the diversity that exists between each community of Mayan languages. I travel to Guatemala when I can in order to maintain my fluency and continue learning first-hand about my Mayan culture."

Recognition for the strong link between language and culture and the impact of this on interpreting. Also of the way languages are constantly changing.


"And because I was raised here in the United States, I am able to assist the English speaker that is trying to communicate with the Limited English Proficient individual."

This is an interesting example of the services an interpreter can provide besides translating. Yet interpreter training programs tend to ignore them.


"I recommend you start by providing volunteer interpreting services; It will help you get the experience you need to interpret professionally."

Students naturally want to earn money as soon as they graduate. But most of them need experience more tHan they need money, because only by experience – if possible, daily experience – can they reach true Expert level.


Term note
Native interpreter is a term Carmelina applies to herself. She means one drawn from a Central Amercan indigenous people, but it could be used for indigenous communities anywhere. Nor is it confined to community interpreting. In the Canadian north, for instance, there are Inuk parliamentary native interpreters for their language Inuktituk in the provincial and territorial legislatures.