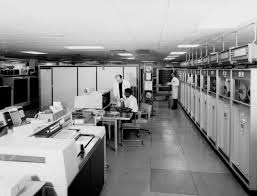 I don't usually write about myself on this blog, but today calls for an exception. It's my birthday, my 87th. I'm statistically and medically lucky to be alive. Average male life expectancy in Spain, where I live, is 79.6 years; and though I'm not completely well, I'm in much better health than I was a year ago. Physically I attribute it to my parents' genes, my wife's vegetarian cuisine and some good Spanish cardiologists. Mentally it may have something to do with racking my brains about translation every day.

It so happens that I also have some other anniversaries to celebrate. It's just 50 years almost to the day that I first saw and worked with a computer. In a sense it was a rebirth. It happened in the summer of 1966. The computer was a new CDC 6400 at the Université de Montréal(see photo), where research on machine translation had recently started. It was a fast machine for its time, but it filled a space as large as a lecture hall though it was less powerful than my present-day laptop. Its input was on punched cards and its output on a line printer. No terminals.

Therefore it's just 50 years since I first became involved in machine translation and its concomitant corpus linguistics. We had received a corpus of English from Brown University on large spools of magnetic tape, and my first task was to scan a KWIC concordance of it for usage of English prepositions. But I didn't really know anything about computers, and a few months later I was humbled at a meeting of leading MT researchers in Ottawa. I scuttled back to Montreal to learn a little programming and Boolean logic.

And skipping a busy decade, it's 40 years since, as secretary of the 1976 COLING conference in Montreal, I was coopted to the International Committee on Computational Linguistics, of which I still am a member.

As well, in a different compartment of my career, conference interpreting, it's just 40 years since I interpreted for Lord Killanin (the IOC president) and Princess Anne of England as one of the team of interpreters at the 1976 Olympic Games in Montreal. (For the princess it was at the equestrian events in Bromont, Quebec, and in my off time I saw Nadia Comaneci make her perfect score of 10 at the Montreal Forum)

And finally, for this post anyway, in another and more enduring compartment of my career, I was working 40 years ago with my assistant, Bianca Sherwood on the data for our joint paper Translating as an Innate Skill. I gave it the following year to the historic NATO Symposium on Language Interpretation and Communication held on San Giorgio Maggiori Island in Venice in the presence of such legendary luminaries as Jean Herbert, Wallace Lambert, Danica Seleskovitch, Patricia Longley, Barbara Moser and many more. I'd already given its forerunner, The Importance of Natural Translation, at the AILA World Congress in Stuttgart the previous year.

That's all for this post. More next year, I dare hope.

To all who helped me, my heartfelt thanks.

Image
A Control Data Corporation 6400 installation circa 1966. The central processing unit is in the background, the magnetic tape memory units are on the right. It's probably the card reader in the foreground.
Source: CERN.
Posted by translatology at 11:46 PM No comments:

NPIT3 has passed into history. Alas, I was unable to attend, but echoes have reached me. I hear it was not an unmitigated success, because a sharp difference of approach arose between those who accept NPIT as a fact of life to be studied and taken advantage of, and those who consider it a bane to be cured with professional training and accreditation. More about this in later posts.

No arrangements have been made for publishing proceedings. It would be a great pity if the contributions (and the contributors?) were to vanish into oblivion, so for the record I've posted the programme of the conference on my Academia.edu page: click here or go to https://independent.academia.edu/BHARRIS. From it you can get an idea of which way the research is tending. Health care interpreting was well represented, but there were some notable gaps: for instance court interpreting and the translation of literary and scientific writings (see the recent post on this blog about Einstein's translator). It would be too limiting if NPIT were to be regarded only as a public service and community phenomenon.

The venue for NPIT4 in 2018 has already been announced. It's the Institute of Advanced Studies at Stellenbosch University (STIAS) in South Africa. We have to wait a little for the exact dates and the call for paper. The person in charge is Prof. Christine Anthonissen, Vice-Dean of Languages. Quite a change after three NPITs in Europe! Apart from the change of scenery and culture, it will hopefully encourage attendance from new regions and bring in more languages. Stellenbosch may sound a long way away for Europeans, but it's close to Cape Town, to which there are fairly reasonable air fares.

Posted by translatology at 11:14 AM 3 comments: 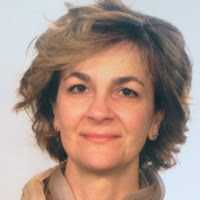 Now I know what it feels like to be the translated (can we say translatee?) instead of the translator. Honoured and grateful.

Marilena's thesis adviser was Prof. Bruno Osimo, the most prolific and far-reaching contemporary Italian writer on translation. Just look him up on Amazon. Where I write articles or blog posts, he writes whole books. It shows his discernment that he's the Italian translator of Alexander Ludskanov's book Human and Machine Translation. Ludskanov was the first translatologist to declare categorically that all bilinguals can translate.

You can find Marilena's translation on my academia.edu page, https://independent.academia.edu/BHARRIS, or click here. She is a founding partner in the Aqua Network: "Contact us and tell us how you want to change the world - we will find the right words for you." She is on Lnkedin.

For Bruno Osimo's translation of Ludskanov, enter osimo in the Search box on the right.

Posted by translatology at 12:48 AM 4 comments: