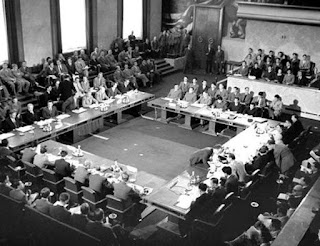 If you look at the comments on this blog's post about Panmunjom (enter panmunjom in the Search box on the right) you will see there an exchange between me and Ron McKinney, aka Old Mack, who was actually at the Geneva conference in 1954 that ended the Vietnam War. An unexpected link with the past after 60 years! In those days Ron was a US Marine security guard. There he got to know Robert Ekvall, the Chinese/English military-cum-diplomatic interpreter for the American delegation. Later Ekvall published a classic autobiography about interpreting that is essential reading for the history of Professional Expert interpretation, not least because the Geneva conference was one of the last major international conferences that was conducted entirely in consecutive interpretation and whispering The book has long been out of print but now it's available free on the internet (see Reference). Ekvall remarked to Ron that it was important for the interpreter to render not only the meaning of the words of the source speech but also its "emotional nuance". Yes, that is one of the several not-so-obvious things that an Expert Interpreter should be capable of doing. Yet examiners at interpreter examinations are rarely asked, "Did the candidate render all the emotional nuance?" Ekvall was thinking of diplomatic interpreting, but it's also important in religious interpreting, theatre interpreting, even court interpreting, and so on.

On the subject of whispering, it's something else that is neglected in interpreter training, Ambassador Arthur H. Dean, who wrote the foreword to Ekvall's book, remarks:

"The system of not having simultaneous translation is not quite as time wasting as is often supposed. While the Chinese tirade went on, Colonel Ekvall used to whisper to me its general nature and purport so I could begin to write out my reply and pass it back to Colonel Ekvall and Lieutenant Campen, my Korean interpreter, so that they in turn could begin to put my reply into the Chinese and Korean languages."

Whispering is one of the most basic and most natural modes of interpreting, though it's not easy to do it well. For more about it, enter whispering in the Search box.

Image
The Geneva Conference in session. Source: US Army photograph.

Posted by translatology at 4:13 AM 3 comments: