Pragmatics 1001: How do we translate You?

A lot of electronic ink is spent on how to translate 'difficult' words from God downwards, but some of the complexities of translating lie in very simple, basic words that are used even by young child translators. Unfortunately most of the 'translation scholars' are too preoccupied with higher things to bother about them.

One such word is the mundane English You.

The English–speaking child who is addressing an older relative to say You in French, German, Spanish or any of many other languages must decide whether to use either Tu, Du, etc. (the familiar forms), or Vous, Sie, etc. (the polite forms). No fudging; it's one or the other; and once the decision is taken it should be applied consistently – though it isn't always. These days the increased informality within families makes the familiar forms more likely, but once outside – at school for instance – the choice arises. It has little or nothing to do with the acquisition of vocabulary, because both forms are valid translations of You and have the same deictic meaning. English is indeed exceptional in having only one pronoun for it: masculine and feminine, singular and plural, polite and familiar.

So what does it depend on?

On the perceived relationship between speaker – in this case the translator/interpreter – and the addressee. A social relationship inculcated a an early age. A relationship that is recognised by linguists – and more especially by sociolinguists – as belonging to a field they call Pragmatics. The simple example of You essentially says it all. Whenever I speak French, for instance, to somebody I haven't met before, I have to consider it. My choice varies according to social factors. In Canada, for instance, if one uses Vous (polite) to somebody who expects Tu, one may give an unfortunate impression of coldness and distance. On the other hand, when I was a research assistant at the University of Montreal, I once asked my boss, the very Canadian professor Guy Rondeau, which I should use to him when we went to meetings together. His reply was:

"Between the two of us, of course use Tu. But when we are in meetings with outside people, I would prefer you to use Vous."

I remembered his advice when I was doing conference interpreting.

This doesn't mean the child, or adult for that matter, arrives at the decision by conscious reasoning. The social relationship is something we feel intuitively, and so is its linguistic expression. Something we feel every day at all ages.

Pragmatics is still, after 50 years of progress in Machine Translation, one of its weaknesses. MT software isn't endowed with feelng and intuition, though it may simulate them somewhat. Here's a little test you can apply. Ask the MT system of your choice to translate x met y at the station into French. Which French verb does it select? Recontrer (run into by chance) or accueillir (welcome)? Both are valid translations lexically but the implicatiions are different. The choice depends on pragmatics. I first happened on this example in 1970 when I was a structural linguist, and it opened my eyes. But that's another story. 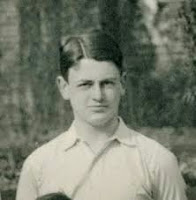 The posts on this blog have been sparse of late, due to illness that hopefully won't last long. Meanwhile I'm posting something that has only a tenuous connection with translation. I do so at the request of an old friend, John Corsellis, as a tribute to his work as an interpreter in Europe at the end of World War II. For more about that, enter john corsellis in the Search box on the right. (It's important to include john in the entry because his wife Ann Corsellis is well known in translation circles.)

It's the Timothy Corsellis Prize Competition for young poets writing in English. The age limits are 14 to 25. Open to competitors world wide and funded for six years.

For full details, click here or go to http://www.youngpoetsnetwork.org.uk/2014/07/11/the-first-annual-timothy-corsellis-prize/

Posted by translatology at 3:48 AM 2 comments: