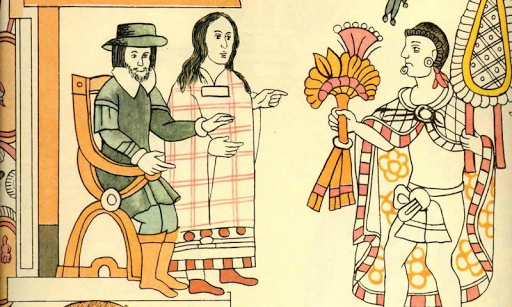 Today, 8 March, being International Women’s Day, it’s appropriate for this blog to feature one of the most famous of women interpreters, an NPIT interpreter at that, La Malinche. Why NPIT? Because she became interpreter for the Spanish conquistador of Mexico Hernán Cortes by circumstance and not by training or for money.

Her story has been told many times, both as history and in fiction, and her reputation has varied from traitress to heroine. Briefly,

Marina [maˈɾina] or Malintzin [maˈlintsin] (c. 1500 – c. 1529), more popularly known as La Malinche [la maˈlintʃe], was a Nahua woman from the Mexican Gulf Coast, who played a key role in the  Spanish conquest of the Aztec Empire by acting as an interpreter, advisor, and intermediary for the Spanish conquistador Hernán Cortés. She was one of 20 enslaved women given to the Spaniards by the Natives of Tabasco in 1519. Later, she gave birth to Cortés's first son, Martín, who is considered one of the first Mestizos (people of mixed European and Indigenous American ancestry).

For another famous NPIT woman interpreter, enter Sacagawea in the Search box on the right.

La Malinche wasn’t Cortes’ only known NPIT interpreter. The other was a man, Gerónimo de Aguilar, but that’s another story.

Posted by translatology at 10:03 AM 5 comments: