When do you get to be interpreter for the president of the United States without any training or official examination? Answer: When you're the president's daughter.

"President Obama may be the leader of the free world, but he's relying on his daughter Malia as his personal interpreter during his historic trip fo Cuba. Malia was captured translating Spanish for her father on Sunday night in a photo that's since gone viral.

"'You know, her Spanish is much better than mine,' Obama said in an exclusive interview with ABC News' David Muir. 'And I'm hoping that she has a chance to get entirely fluent.'"

Malia is a few years older than George Thomas Staunton, who was the subject of the preceding post on this blog. She is 17. Nevertheless she is still in high school and therefore out of range of the American university translation programs. It's interesting that she can serve as interpreter though her Spanish isn't very fluent. Her father did opine, though, that "as a proud father I have to say that her Spanish is getting very good. It helps that she's smarter than I am." We aren't given a verbatim sample, but her father seems pleased; so we can conclude that her interpreting was 'fit for purpose'. In the photo, "the teenager appears to be confident and happy to be helping her father, as she put her high school Spanish education into use."

The Wikipedia article on the Obama family doesn't mention Malia's language education. Her father's bilingualism in Englsh and some African languages may have encouraged her. She did visit Oaxaca on a school trip last year. It may actually be an exaggeration to classify her as a Natural Translator, since she may have had translation instruction during her Spanish courses. But if it's an exaggeration, it's only a slight one.

Source
Rarely has an interpretation performance, natural or professional, received so much press mention. All the American news networks mentioned it.

Image
The President and Malia share a laugh as Malia translates Spanish to English for her dad at a restaurant on Old Havana. Photo by Pete Souza, chief White House phoographer.

Posted by translatology at 12:40 PM 7 comments:

A Young Interpreter In Another Era: George Thomas Staunton 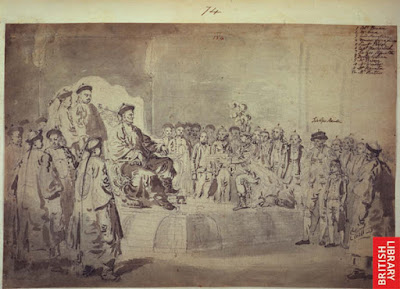 The penultimate post on this blog was about the contemporary Young Interpreter movement among schoolchildren in England. Before them there was an ample literature about the child interpreters of immigrant families in the United States especially, called language brokers. And going back further, we have accounts of child interpreters as early as Jules Ronjat's groundbreaking book Le développement linguistique d'un enfant bilingue published in 1913. But earlier than that, nothing – or almost nothing. Finding a pre-1913 description of a child interpreter is like turning up a rare coin in an untilled field. There are two reasons for this scarcity. The first is one that affects all the history of interpreting: the fact that interpreting, unlike written translation, left no material trace of itself prior to modern recording technology. So we have no interpretation comparable with the Lady Elizabeth's sixteenth-century Le miroir de l'âme pécheresse for example (enter lady elizabeth in the Search box on the right). And the other is that translatologists, even if it was occurring under their noses, didn't think it was significant (and there are many like that even today).

Which is what makes the case of George Thomas Staunton so interesting for us.

George Thomas was the son of George Leonard Staunton (1737-1801). The latter was secretary to an English nobleman, Earl Macartney and he was an accomplished descriptive writer. He was both a physician and a lawyer, had travelled widely and was friendly with prominent literary and political figures of the time. Macartney was an experienced colonial administrator in the days when, as he himself said, Britain controlled "a vast empire on which the son never sets." By the late 18th century, that empire had been pushed eastward by the British East India Company till it confronted China. The prize was trade. Europeans had developed a taste for that country's export ware, including porcelain and tea. So the British sought better organised, more open trade relations with China. But the proud Chinese turned out to be a hard nut to crack. Several British embassies to the Chinese emperor had failed. Then in 1792 it was decided to have another try. Macartney was sent out as Ambassador Extraordinary. He sailed on several ships with a large delegation that included, naturally, his secretary. George Leonard was in effect Macartney's right-hand man. Far more unusual was that Staunton senior decided to take his son along with him to see the world. The younger Staunton's presence was covered by having him appointed as page to Macartney. The embassy reached its destination, the imperial court, the following year.

It seems extraordinary that for such an important embassy so little attention had been paid to the language barrier and the need for interpreters. It may have been because the East India Company, which had been pressured into paying for the expedition, had previously suffered a bad experience with one of its interpreters and was even openly hostile to training more. So Staunton brought along two Chinese Catholic student priests from the Collegium Sinicum (College of the Sacred Congregation for the Propogation of the Faith) in Naples, where Chinese was taught to missionaries; but they didn't know English. They were accustomed to interpreting Chinese and Latin. During the long ocean journey, George Thomas, who was good at languages, studied Chinese with them. Prior to trip, he had already started to learn Chinese in London.

The result was that when Macartney and his entourage finally had their audience with the Emperor Qianlong, only George Thomas was capable of conversing with him.

George Thomas Staunton was 12 years old. What an adventure for a young boy! It may be an exaggeration to say that he acted as Macartney's interpreter, though some sources say he knew Chinese well enough to do so. There was in fact a Chinese interpreter present, one of the Chinese students, but communication through him had to be relayed through Latin. George Thomas's conversation was brief. But the Emperor was charmed by the little foreign boy who could speak Chinese, and thereby the latter helped foster the friendly relationship that we always establish when we take the trouble to learn the language of our hosts. The Emperor showed his appreciation by a mark of special favour, a personal present.

George Leonard Staunton. An Authentic Account of an Embassy from the King of Great Britain to China... Dorothy Sloan Rare Books, 2016. http://www.dsloan.com/Auctions/A17/lot_73.html

Seán Golden. From the Society of Jesus to the East India Company: a case study in the social history of translation. http://pagines.uab.cat/seangolden/sites/pagines.uab.cat.seangolden/files/SeanGoldenSocietyOfJesusEastIndiaCompany.pdf

Ruth A. Roland. Interpreters as Diplomats: A Diplomatic History of the Role of Interpreters in World Hstory. 1982, republished Ottawa: University of Ottawa Press, 1999. See Staunton in the index.


Image
Macartney's first meeting with the Emperor Qianlong. George Thomas Staunton can be seen on the lower right. A sketch by the embassy's artist William Alexander. Source: British Library.


NPIT3, Winterthur (near Zurich), 5-7 May 2016
International forum for Non-Professional Interpreting and Translation, the latest paradigm in translation studies. http://www.zhaw.ch/linguistics/npit3.

Posted by translatology at 7:30 AM 4 comments: