The Queen of Spain Thanks Her Tactile Interpreters 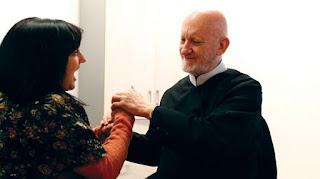 A little over a hundred kilometres to the south of where I live lies the resort town of Benidorm. IMHO it's a blight on the Spanish coastal landscape, famous for cheap package beach holidays and jnfamous for boozy Britons; though to be fair it also has a colony of respectable expatriates. Amongst the latest news from Benidorm is the following:


A shooting in the heart of Benidorm’s nightclub district on Wednesday night caused panic among innocent holidaymakers and resulted in a police lockdown of Calle Mallorca, known as The Square among Britons.


So it took an extraordinary event a few days ago to bring Queen Letizia of Spain to Benidorm for the first time. That  event was the 5th General Assembly of the World Federation of the Deafblind and 11th Helen Keller World Conference.

It may come as a surprise to read that the deafblind community is large and organised enough to support an international conference in a luxury hotel, but there are an estimated half a million deafblind people in the world and the conference has been acting as a forum since 1977.

The most obvious peculiarities of such a conference are first that all the participants need a personal interpreter in order to interact with other people and with the world around them; and second that, since they are denied sound and sight, the two usual media of interpreting, they must fall back on another of the human senses: touch. Interpreters who communicate by touch are called tactile interpreters, and the signs that they use are called haptic signs. (Tactile from Latin and haptic from Greek, both meaning touch.)

One classic, well-known haptic sign system is braille, which uses patterns of raised dots. perceived through the fingers, to represent the written alphabet. Like some other systems, it's used at two levels, elementary and advanced. The advanced level includes many short cuts and abbreviations. I know, from having had a blind colleague, that an advanced reader who's been using it since childhood can read a braille text as fast as a sighted person can read a printed one.

Tactile interpreters are one kind of interpreter who must be skilled in doing more than just transmitting language. Their clients being sightless, they must in addition convey some description and explanation of the context by an analogue of what is elsewhere called audio description.

The most famous tactile interpreter was Anne Sullivan (1866-1936). She was the interpreter, amanuensis and lifelong companion of the American deafblind writer, political activist and lecturer Helen Keller (1880-1968). In spite of Helen's disabilities, they travelled the world together. Anne had managed to obtain an education at the Perkins School for the Blind in Boston, where she became a teacher and learned the American Manual Alphabet, which can be used as a haptic code for fingerspelling (see Sources below). She was therefore not completely untrained when she was taken on as Helen's teacher. But Helen and Anne had less known though well documented predecessors, and there the story was somewhat different. Helen's predecessor was another American, Laura Bridgman (1829-1889). She too was a Perkins graduate 50 years before  Helen. She did receive ephemeral fame when Charles Dickens met her on his American tour and wrote about her. As a young child,


Her closest friend was a kind, mentally impaired hired man of the Bridgmans, Asa Tenney, whom she credited with making her childhood happy. Tenney had some kind of expressive language disorder himself, and communicated with Laura in signs. He knew Native Americans who used a sign language, (probably Abenaki using Plains Indian Sign Language), and had begun to teach Laura to express herself using these signs when she was sent away to school.

It's clear that. in the absence of any training, 'Uncle Asa' – as he was known to the family – was a Natural Sign Language Interpreter. Later, at Perkins, Laura was taught braille.

Since the tactile interpreters don't yet carry enough weight to form their own international organization, they have been taken under its wing by the World Association of Sign Language Interpreters, the organisers of the Benidorm assembly. Aong the goals of the WASLI are to


elevate awareness of Deafblind interpreting at conferences on a global scale [and] advocate for equal pay and working conditions for interpreters working with Deafblind people at conferences.

Queen Letizia took pains in her closing speech to the assembly to give warm thanks to the tactile interpreters who had enabled her to converse with some of the participants.

World Federation of the Deafblind. World Conference 2018. Click [HERE] or go to http://www.wfdb.eu/wfdb-world-conference-2018/

Posted by translatology at 1:31 AM 12 comments: