After a string of theoretical posts, here’s one on a practical and very contemporary topic.

Distance interpreting aka remote interpreting means that the interpreter is not physically present in the place where the speaker(s) and listener(s) are located but is connected to them by audio or visual link from a separate site. The opposite is on-site interpreting. It’s by no means new. In my All of Interpreting, written 30 years ago (see Sources below), there was already a section about it. The American telephone interpreting enterprise LanguageLine had been launched in 1982 and been acquired by AT&T. It remains very successful both in the service it provides and commercially, as do the many similar enterprises that you can see advertised nowadays on the internet. They are widely used by hospitals, social services and the police. Whatever their shortcomings compared to on-site interpreting, they can offer immediate 24-hour availability and a wide variety of lesser-spoken languages; and above all they are economical.

Modern technology has extended these services to video interpreting and hence to sign languages.

However, a characteristic of all such services has been that they were intended for person-to-person communication or for small groups that could be connected in a conference call; what is often referred to as dialogue interpreting. Now the advent of computer platforms like Zoom and Skype makes it possible to interconnect much larger groups and to have remote conference interpreting. Zoom, for example, provides a simple interface and claims to allow access to online meetings with up to 500 attendees.

“When the coronavirus pandemic brought New York City to a halt, United Nations interpreters ran into big trouble: their booths and equipment were no longer accessible. However, they are rising to the challenge, exploring new ways to service multilateral meetings, including from their homes...

“’We unexpectedly found ourselves in our apartments wondering how to continue performing our duties and contribute to multilingualism,’ said Veronique Vandegans, Chief of the French Interpretation Section. ‘However, it quickly became apparent that we could adapt and interpret remotely, given the proper equipment, testing and training.’"

So much for the many objections. Suddenly it could be done, as surely as when Léon Dostert introduced simultaneous interpreting over the objections of the old guard of consecutive interpreters in the late 1940s.

No one doubts that there are problems. For instance,

“One major challenge is [for interpreters] to find a suitable place in their homes. Even under optimal conditions, a home location is not on par with a confined booth, where interpreters can reach the high level of concentration their job requires.”

Some improvements could be made. The quality of the equipment is crucial. Early experiments in the 1960s failed because communications were uneven or the sound and picture were too poor. One of my own early experiences with remote interpreting was for a televised Canadian election debate in 1984. On that nationally important occasion it was decided that the interpreters couldn’t be accommodated in the studio with the candidates, and so the TV engineers provided me with a video link to a room in another part of Ottawa. In so doing, they provided me with something I never had again: a giant TV screen that made me feel I was really present in the debate studio; and when they did close-ups of speakers I could see their expressions better than I would have on site. I would still recommend larger video screens. On the other hand, something they didn’t provide was a circuit for direct connection and feedback between the interpreter and the moderator of the debate. On site, if there is any hitch the interpreter can wave to the meeting participants or send a colleague to explain.

Also a long time ago there was a proposal, I think in Eastern Europe, for a centre where there would be a pool of remote conference interpreters on permanent duty instead of arrangements being set up anew for each event. I don't know what became of it.

But now the question is, what will happen when the crisis eventually subsides?  Return to the old way or consolidate the new? I think the latter, inevitably, because of the economies it represents. Only very rich users like the United Nations or the Canadian Parliament will be able to hold out against it. Of course something is lost in remote interpreting, but every new technology requires a trade-off between craftsmanship and price.

In addition, the success of both remote dialogue interpreting and remote conference interpreting make it imperative to add them to the training for student interpreters in the universities.

Brian Harris. All of interpreting: a taxonomic survey. https://www.academia.edu/12072834/All_of_interpreting_a_taxonomic_survey or click [HERE]. A Spanish translation is available from the same site under the title Panorámica de los distintos tipos de interpretación.

Posted by translatology at 12:12 AM 9 comments: 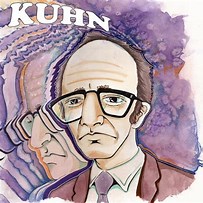 Periods, schools and tendencies in research are commonly divided into what Thomas Kuhn called paradigms. A paradigm is “a distinct set of concepts or thought patterns, including theories, research methods, postulates.” A more down-to-earth synonym might be mindset. Generally speaking, paradigms are constituted of theories and methods. Thus the Darwinian paradigm in biology combines Darwin’s well-known theory of evolution and the methodical observation and description of historical and contemporary evidence. A new paradigm may displace an older one in what Kuhn called a paradigm shift, but the old one may live on beside it. Thus the Darwinian paradigm, though it’s currently dominant, has not entirely replaced the Creationist one.

However, a paradigm may also be shifted by the object of study, something that is usually overlooked. Thus translation studies in pre-modern times were mostly based on written texts: on comparison of texts and their translations. Texts, furthermore, produced by humans. Only since the second world war have several new paradigms arisen, one of which is process-oriented translation studies, a paradigm that studies the translator’s mental operations rather than the texts they produce. Typical of this paradigm is Roger Bell’s book Translation and Translating (see Sources below). However, the older text-based paradigms persist undiminished to this day.

As for machine translation (MT), it has been through two paradigms: first the rule-governed linguistic paradigm from 1947 to 1988, and then from1988 the statistical paradigm that is now evolving into an artificial intelligence paradigm. A recent contributor to another blog gave a detailed analysis of the many imperfections in an MT French translation of a letter by Franz Kafka. Her criticisms were justified, but they were completely misplaced because she was applying to MT the method and standards of a different paradigm

In a recent post on his blog Still Thinking, the prominent interpreter-researcher Jonathan Downie deplored the multiplicity of theories in translation studies:

“What I am suggesting is that it might  be useful to set some criteria, whether the ones I have suggested or some different ones, which we could use to perform a kind of loft clearance of translation theories. Perhaps we might find a few theories *coughequivalencecough* that can safely be ditched while others can be upcycled or combined with still other theories to make something even better.”

But realistically we cannot ditch theories, for two reasons. One is that researchers will not readily give up a favourite theory, especially if it’s their own (pardon the cynicism). Another, more substantial, is that the theories belong to different paradigms and so do not compete. That a translation may be determined by statistical identification of a segment in a previous translation or translations, as in today’s MT, simply has no competitor in human translation and its paradigms.

The biggest paradigm, in terms of the amount of discussion it generates, and one of the oldest (since Cicero and all that) is the literary translation one. And still very lively, as the current polemic over the views of Lawrence Venuti shows (see Sources).

Another very old but persistent paradigm is the Bible translation one. Sometimes it overlaps other paradigms, for instance the literary translation one (e.g. Meschonnic) or the linguistics one (e.g. Nida, see Sources); but it has its own defining characteristics, which are religious and missionary.

Certainly, as said above, machine translation has its own paradigms and those paradigms even involve quite different researchers from those who work on human translation. Most of them are computer scientists and mathematicians who only turn to linguists for the practical tasks of developing applications.

And so we arrive at the point of this post. All the paradigms before the 1970s, even MT ones, were not just based on texts, they were based on texts that were highly skilled documents. Whether they were works of literature or technical manuals, they required skilled translators. Schools of translators were set up to train translators in these paradigms and their norms.

Then in 1973 a new paradigm dawned, in maverick fashion and at first composed of a single theory, the Natural Translation Hypothesis. This paradigm did not introduce any new methodology or scientific approach but it did have distinctive characteristics in its object of study. First the translators who served as it subjects were inexpert, totally untrained, naïve, primarily children. They had to be bilingual of course, but not necessarily balanced bilinguals. This  paradigm rejected the old adage that “because someone is bilingual, it doesn’t mean they can translate,” and replaced it by, “All bilinguals can translate.” Second the texts or utterances studied were such as are appropriate for the language and cognitive level of the translators just described.

The new paradigm expanded, first into studies of bilingual immigrant children, the so-called language brokers, and then became ever-widening as the study of what is now called non-professional interpreting and translation (NPIT) with its specialised international conferences.

However, NPIT studies have not dealt with the key tenet of the natural translation hypotheses, which is that the ability to translate is inborn. All natural translation is NPIT, but not all NPIT is completely natural. For example, there are many self-taught expert translators who translate for colleagues as a sideline to their usual professional activities. Still, for the time being it’s convenient to consider natural translation a partner in the new NPIT paradigm.

For a discussion of this post and my reply to it, see Jonathan Downie's blog Still Thinking at https://jonathandownie.wordpress.com/2020/08/is-natural-translation-and-paradigm-and-should-it-matter-a-response-to-brian-harris/#comments or click [HERE].

Posted by translatology at 11:51 PM 6 comments: