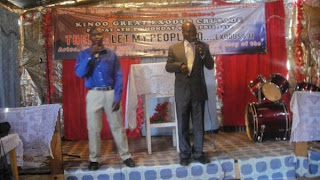 Image
Which is the interpreter, which the preacher? It was at a service like this in Cameroon that I first encountered church interpreting myself. − BH
Source: stchronicle.wordpress.com
Posted by translatology at 12:31 PM 5 comments:

It was decided, by drawing out of a hat at the conclusion of NPIT2 in Germersheim last weekend - see previous post - that NPIT3 will be held in Zurich in 2016, and NPIT4 in South Africa (at Cape Town or Stellenbosch) two years later.

It looks like the adventure that started at Forli in 2012 is gong worldwide. As I wrote in The Importance of Natural Translation, a paradigm is determined not only by its methodology but also by its object of study. Consequently a new paradigm is emerging in Translation Studies.

Posted by translatology at 10:48 PM No comments: