This is the latest in the leading conference series of its sector. The theme this time is Global Awakening: Global Practices in Community Interpreting. The website is here.

I'm scheduled to give a five-minute introductory talk. No, I won't be there, alas. Too far. Pre-recorded.

Posted by translatology at 10:27 AM 2 comments:

Technology and the Expert Translator 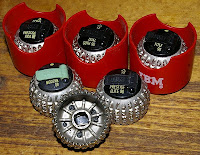 In what follows, translating refers to written translation. Interpreting is another story.

Once upon a time, Expert Translators only needed two pieces of technology. One was the time-honoured paper dictionary, and the other was a typewriter (preferably an IBM Selectric with its interchangeable print balls). Indeed, in the 1970s and 1980s I visited several countries where even Professional Translators were still writing out their translations in longhand. Perhaps the first really useful modern technological novelty was the photocopier.

First came word processors. In the beginning only for English, but then extending (and still extending) to other languages. In the 80s I came across an Arabic processor (very clunky) for the first time in Amman, and an Inuktituk one in Canada. In the following decade, the world of communications was transformed by the internet.

The above, however, were universal tools that translators used along with other writers and office workers. How about more dedicated tools designed specifically for translators? The first breakthrough was the computer-stored multilingual term banks; in Canada and Europe from about 1970 onwards. Computer stored but still very labour intensive. The second wave was that of translation memories using bitext (see Terms below), which were invented at the end of the 1980s. Then people got the idea of linking them along with the above-mentioned universal tools into what we called translator workstations.
More recently, the workstation components have been fully integrated and marketed as computer-assisted translation (CAT) software suites. The best known of them is Trados (www.trados.com). It includes terminology management, translation memory building and other functions. Many employers now require their staff translators and freelance contractors to know how to use it.

Translation memory is also changing bilingual lexicography. Linguee (www.linguee.com) is now the dictionary I most often turn to, and it‘s based on translation memory. Also it’s a dictionary that requires the judgement of an Expert or Advanced Native Translator.

For me, the turning point had come already in 1976. It was in that year that we introduced a Computers and Translation course into the undergraduate translation programme at the University of Ottawa. A Canadian first. My colleagues agreed to it only on condition that it be an optional course. But by 1980, at the request of the students themselves, it became compulsory.

Nowadays conferences and seminars on translation technology have become all the rage in translation studies. It’s impossible to keep up with the innovations and assess them all. That‘s why Jost Zetzsche‘s Tool Box Newsletter (see References) is so useful. He wrote recently,


“Someone asked me last week: Do you still always come up with enough material for your newsletter? The answer is I don't have to: the material comes to me. If there was enough to cover in translation technology 219 editions ago, there is certainly more than enough today.”

All this is leading up to the following:


One of the distinguishing characteristics of the Expert Translator is knowledge of the technological tools available and how to use some of the most advanced ones. The Natural Translator doesn’t need them and may not even be aware they exist. The Advanced Native Translator is likely to have become acquainted with the most basic ones.

Notice that for once I'm saying something prescriptive; the reality is that Expert Translators, even Professional ones, often fall short of the ideal, especially the older ones.
Terms


Julie McDonough Dolmaya teaches translating and translation studies at university level in Toronto. She has a blog, which has recently been mostly about her teaching innovations. This week, however, there’s something different: an obituary of a distinguished American literary translator, Joan Pinkham.

Joan was best known internationally as the English translator for the French historian Henri Troyat, but in Canada for her translation of Les Nègres Blance d’Amérique (The White Niggers of America) by Quebec nationalist writer Pierre Vallières. What makes the obituary outstanding is that Julie had the good fortune to be able to interview her towards the end of her life, and the interview, which Julie transcribes for us, is full of glimpses into the joys and tribulations of a literary Professional Translator. Anyway, read it all here on Julie’s blog.

I draw attention to it on this blog for one particular passage in the interview. It’s where Joan states categorically,


“As a translator, I am basically self-taught [my emphasis]. At the time I was in school, there were no official academic programmes in translation in the U.S. (or none that I was aware of). Courses at the British Institute in Paris and at Middlebury College in Vermont — they were called “Stylistics” – were invaluable but insufficient for my purposes. So I studied on my own, reading such books as I could find, preparing translations of Maupassant and comparing mine to the many different printed versions, learning much from the bilingual documents that constantly came across my desk at UN.”

This means that she started out as a Native Translator, albeit an Advanced Native Translator. (For more on these terms, enter essential definitions in the Search box.) She became an Expert Translator by working at it on her own and by the publication of her books. (The Literary Translators’ Association of Canada accepts one published book as a sufficient qualification for admission.) Hers was the typical developmental profile of literary translators. Like all bilinguals, they can already translate. They hone their craft by reading and by practising their writing skills, not by going to school. If they have academic qualifications, those are usually in literature.

Posted by translatology at 4:07 AM 5 comments:

The Hampshire Young Interpreter Scheme (YI) has been featured in several recent posts on this blog. I’ve praised it as significant for bilingual education, but don’t just take my word for it: it won a European Award for Languages in 2010 and was a finalist for the MJ Local Government Achievement Awards in 2012. Ofsted, the official body for inspecting UK schools, has declared that


“Those pupils who act as young interpreters make an outstanding contribution of enabling those pupils speaking little English and their parents or carers to take full part in all school activities.“

Now the YI Guidance Pack for teachers has reached me in Valencia.

The Pack is a well-organised, stimulating and suggestive aid for teachers in schools that have a considerable proportion of immigrant students speaking languages other than the dominant language of the country. It's attractively designed and illustrated. It comes with a DVD that contains some good videos. Pupils also have access to Moodle, a free e-learning internet software platform.

Interpreting is treated as a serious practical activity, not as a game or pastime. The mode of interpreting is dialogue interpreting in a community interpreting setting. Here’s what the Pack has to say about preparation:
Good advice for adult interpreters too.
And here are some of the "golden rules" in the Interpreting Check-List:
The Guidance deals with a point that troubles some people when they hear about such young people interpreting, that of their having access to confidential information. It says,

Be it noted that confidentiality is among the rules of interpreting that are mentioned by students themselves.
How about recruitment and selection? Most of the pupils considered are already fluently bilingual or multilingual and have previously been ‘new arrivals’ themselves; and all must be “good role models in terms of their use of English,” which I take to mean that they speak something close to ‘standard’ English’ as taught in schools. But there is provision too for second-language learners “nominated by the Modern Foreign Languages departments in secondary schools.” In addition, they should demonstrate “a good knowledge of school routines, systems and activities,“ which takes care of some of the extra-linguistic needs. For the rest, the qualities sought are personality ones: “patient, good listeners, good communicators, responsible, etc.”  What is not tested or questioned is their ability to translate. It is assumed that they have it intuitively as bilinguals, and also that it will improve with some training. Both assumptions accord with the Natural Translation Hypothesis (click here for more.)

As one would expect from experienced teachers, there are lots of Role Play Scenarios, Interpreting Scenarios, Resource Sheets and the like. There are sections on selecting pupils to participate, on organising the training sessions and on what can be expected from ‘graduates’.
The DVD videos include a tribute from a head teacher and advice from a professional interpreter, an example of good interpreting by a student and also one of bad interpreting by an adult. This last is hilarious. It’s in the folder of Good and bad interpreting situations.
If you’d like to get hold of the Pack, go to the website http://www3.hants.gov.uk/education/ema/ema-resource.htm, then to the tab Downloads and Packs, and there you’ll find a link to an order form. The price is 38 pounds including postage and tax.