For light reading during the holidays, I've put a short article on my Academia.edu page. It relates an incident from my 20-year career (1970-1990) as a freelance conference interpreter in Canada, and incidentally it quotes a story that throws some light from an unexpected source on professional interpreters in Victorian England. To read it, click [here] or go to https://independent.academia.edu/BHARRIS. The title is My Greek Interpreter.

The reason I think Sir Arthur Conan Doyle had a real-life model for the character of Mr Melas in the quoted story is the verisimilitude of the latter's description of his work. He says that he knows "all languages – or nearly all," (Conan Doyle obviously describes him with tongue in cheek) and this reminds me of an interpreter who used to work in the Toronto courts. His first language was Russian, but he claimed that he could interpret all the Slavic languages. Eventually he was found out by a lawyer of Polish extraction who then had to do the interpreting himself for one of his Polish clients. (It was admissible in those days.) It was the lawyer who told me about him.

Image
Illustration by Sidney Paget for the first publication of The Adventure of the Greek Interpreter in The Strand Magazine, 1893. Mr Melas is on the right.

Posted by translatology at 9:03 AM 2 comments: 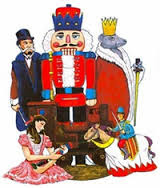 Once upon a time, in the early years of this blog, there used to be an annual Christmas Diversion. It took the form of a history that traced how a foreign folk tale or fairy story came to be transformed by translation and adaptation into a popular Christmas entertainment for children and their parents in British theatres. Some of them became a unique British form of musical comedy called pantomime (or panto for short). Others provided the story line and characters for ballets. Their traditions endure.

The Diversion posts are still available on the blog but they are scattered and difficult to find if you aren't adept with the Search function. So this year I've compiled a single cohesive document of them. It's too long for a blog post, so I've transferred it to my Academia.edu page, which you can reach in a twinkling by clicking [here] or going to https://independent.academia.edu/BHARRIS,

The stories are Aladdin, from the Arabic of The Thousand and One Nights; The Nutcracker from the German stories by E T A Hofmann; and Cinderella and The Sleeping Beauty, both from the French tales by Charles Perrault.

Merry Christmas!
Posted by translatology at 6:35 AM 2 comments: