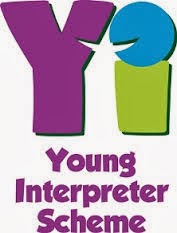 Several posts in the course of this fast disappearing year have been devoted to the Young Interpreters. It’s the movement started and developed in the UK by Hampshire County Council's Ethnic Minority and Traveller Achievement Service (Emtas) and coordinated by Astrid Gouwy and her team. Participating schools at all levels set up programmes to encourage bilingual pupils to interpret for their peers and give them some basic training. To find the posts, enter emtas in the Search box on the right.

Now comes great news. The scheme has been named winner of the Grassroots Excellence category in this year's The Guardian newspaper’s Public Services Awards and overall winner of the Awards. A richly deserved recognition!

The Guardian citation says this:

“A scheme that makes a vital impact on a pressing social issue, yet costs almost nothing, sounds too good to be true. But that is the beauty of the young interpreter programme developed in schools in Hampshire.

“By giving children the role of supporting others whose first language is not English, the groundbreaking scheme is promoting successful integration of migrant youngsters, accelerating their learning and helping the young interpreters become accustomed to responsibility.

“Presenting the award, David Brindle, the Guardian's public services editor, said: ‘Like so many of the best ideas, the Hampshire Young Interpreter Scheme is so stunningly simple that you wonder why it has not been done before. It has negligible costs, yet is fantastically popular with both the children who act as young interpreters and those they befriend, making them welcome and helping them adapt to their new surroundings and language. It is making a priceless contribution to social cohesion.’


“The idea is that training pupils already fluent in English to act as interpreters, will take the pressure off the council's interpretation service and help new arrivals – who often speak no English at all – to settle into their new schools and learn the language at the same time.


"’Our school has got 27 different languages and, with the best will in the world, there's not the money to fund that with bilingual resources,’ says Fairfields [primary school]’s deputy head, Vicky Hopkins. ‘We were looking for a way to support these children using what we already had available.’


"We had a lot of children who had already been through the experience of being a new arrival in our school. They were now advanced bilingual learners; they're very proud of where they come from, and of being able to speak other languages."


Young Interpreters goes some way towards implementing Jill Karlik’s suggestion in the last post, based on her observation of three-year-old language brokers in Africa, that interpreter training for bilingual children should start very young.


Astrid Gouwy’s address is Astrid.Gouwy@hants.gov.uk.
Posted by translatology at 10:32 AM 2 comments:

Recent Articles from The Linguist


This blog has several times recommended and quoted from The Linguist, the bi-monthly magazine of the UK Chartered Institute of Linguists. Under its vivacious and highly competent editor, Miranda Moore, who often does her own fieldwork and has a keen eye for graphics, it contains many articles that are of interest for us here. The latest issue, October-November 2013, is no exception. And now that there’s an electronic edition (see References), it’s easily accessible.


A recent article I particularly enjoyed was ‘Let’s get physical’ by Rekha Narula, in which she looks at the challenging physical environment for interpreters working like her in the UK health service. It’s true to life. But Rekha is a Professional Expert, and so further discussion of her modus operandi would be beyond the scope of this blog.


Nataly Kelly too is a Professional Expert, but her article (see References) does fall within our scope because it’s about a hot topic in non-professional translation, crowdsourcing, and most crowdsourcing contributors are Advanced Native Translators but not qualified Experts. (For more about it on this blog, enter crowdsourcing in the Search box on the right.) Part of the article is given over to persuading the Professional Experts that community translation (as she calls it) isn’t a threat to them: “Community translation: friend, foe or no big deal.” But what interests me most are the measures she describes for checking and revising the contributions. Translation crowdsourcing has already developed beyond ‘anything goes’.
“The freelance [professional] translator community became enraged when, in 2007, Facebook began using members of its community to translate its platform into other languages. The complaints primarily consisted of exclamations such as… ‘They can’t ensure quality if they use the unwashed masses.’… Facebook came up with its own [software] solution, [a free app] which allowed its huge community to cast votes for the best translations. [If you want a glimpse of the Facebook app, click here.]
"This enabled the company to ensure that a single translator was not deciding how millions of people would say ‘write on your wall’ in their native language. Instead, the community of users had a say in how they wanted to see phrases translated… the majority decides which translation it likes best... The sheer number of volunteers is a safeguard to quality but smaller communities can struggle to find sufficient numbers, and that can mean that the translation is never launched… Many community managers will not trust a translation if it hasn’t been reviewed by several volunteers.”


A noteworthy implication of this procedure is that, for better or worse, not only the translating but also the assessment of the translations is done by non-Experts. It becomes communal, distributed and democratised.  But even if the translators are not Expert Translators, they may well be subject-matter savvy and they have a passion for language.  The same can be said of the Wikipedia translators whom Julie McDonough has been studying (enter mcdonough in the Search box), though they make their revisions without special software.


The third article that struck my attention did so because it adds first-hand information to a topic that has already appeared several times on this blog, namely church interpreters in Africa. It’s by Jill Karlik of Leeds University, who studied them in The Gambia. In a post a long time ago, I told how impressed I was by the dramatic manner  of a church interpreter in Cameroon (enter buea in the Search box).  So it struck a chord when I read the following:


“Some of the younger generation…  gain recognition as competent interpreters within the frame of church events. I found they meet end-user expectations by a highly communicative and lively manner…  It occurred to me that their skills deserved wider recognition.”


Most important, though, are her comments on the development that they have been through.


“In this multilingual milieu, all the interpreters in my study had grown up interpreting since childhood, serving the function of ‘community interpreters’. I observed children as young as three [my emphasis] acting as interpreters for visiting cousins.”


In the centennial year of the publication of Ronjat’s Le développpement du langage chez un enfant bilingue (enter ronjat in the Search box), it’s good to have this empirical confirmation of the young age at which bilingual children can start to translate communicatively.


Finally, along this line of thinking, she raises a question that deserves discussion and action:


“…whether there might be some way of helping young ‘natural’ interpreters benefit from appropriate training at an early age, at a time when they are most receptive to developing their cognitive skills.”

The Linguist. Edited by Miranda Moore. London: Chartered Institute of Linguists, bi-monthly. The paper edition is available from the CIoL (www.iol.org.uk) at GBP 41 a year plus postage. The electronic edition is free here, but the references below are to the print edition.

Posted by translatology at 2:15 AM 3 comments: