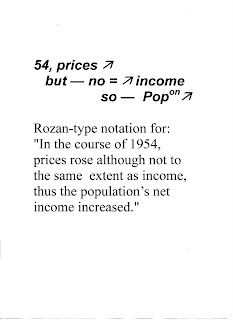 Natural Interpreters don't take notes. Indeed many of them, being young children, can't write or read yet. This limits the chunks of speech they can translate at a time to a sentence or two. At least as a rule; in a later post I'll mention an intriguing exception.

Native Interpreters may know to take notes and how to do it. If they know how, it's because they carry the skill over from some other educational or work activity.

The first time I had to do long consecutive, it was for an after-dinner speech of thanks at a banquet and I hadn't been trained for it nor even forewarned. Nonetheless, I didn't trust my memory and I took the precaution of finding a blank page in the programme and borrowing a pen from another guest. Why did I know to take notes and how did I know how to do it? Undoubtedly from years of taking notes in class and at lectures, and from recording proceedings in order to write the minutes of meetings. Thus I knew to pick out the key ideas in the message and to record them in a mixture of ordinary longhand and abbreviations – a by-product of education that has proven useful to me on several occasions. But I lost a lot of the detail – it was a ten-minute speech and the programme page wouldn't have held more than I wrote – and so I had to fill in with what Expert Interpreters call winging it. Still, since the speech was just polite rhetoric, I got by.

For Expert Interpreters, it's a more highly developed skill, and it's taught as a subject in 'classic' interpreter training programmes. First, students are told not to try to record in shorthand. Taking shorthand fast enough – up to 150 words a minute – and furthermore reading it back fluently, is a trained skill in itself. Instead they are taught to use a 'concept notation' of graphic symbols, 'speedwriting' and spacing, in which a given concept is always represented by the same symbol or abbreviation whatever wording has been used to express it. The layout of the notes on the page is also meaningful. With the classic training goes a classic manual from the days when consecutive was the standard mode of conference interpreting: it's the one by Rozan (see References). Nobody I worked with used Rozan exactly as is, but students can extract from it and substitute whatever symbols of their own they feel comfortable with. What's essential is the principle of noting concepts and not words. Nor need the notes be complete; they're only a prop and a stimulus for the memory, and it may be that the interpreters themselves can't reconstitute the speech after a lapse of time. There's a famous research thesis by Seleskovitch based on conference interpreters' recall from their notes (see References).

For expert notetaking, it's important that the notepad be of the type used by reporters and shorthand secretaries, easily held in one hand or perched on one knee, with pages that can be flipped over quickly, and that it have a hard back.

Finally, there's one additional skill that's often overlooked in the training programmes. It's the ability to take notes and translate from them standing up and 'on the trot' instead of sitting comfortably in a classroom or a booth.

References
Jean-François Rozan. Note-taking in Consecutive Interpreting. Krakow: Tertium Society for the Promotion of Language Studies, 2005. Translated by Andrew Gillies from the French La prise de notes en interprétation consécutive, 1956. There are other systems, and there's a whole literature on this topic.

Term
Winging it. In interpreter's jargon, it means filling in for something that wasn't heard or wasn't understood, or that the interpreter has forgotten or simply can't translate. To be successful, i.e., to go undetected, it must be something that the speaker might have said. More about it some other time.

Image: Interpreter Training Resources, "the only dedicated site for students of conference interpreting". http://interpreters.free.fr/.
Posted by translatology at 12:09 PM