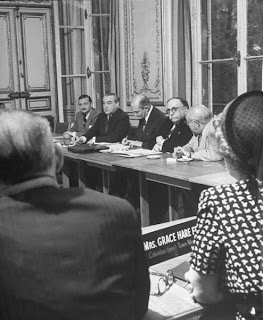 The annual Valencian Falles festival (in Spanish, Fallas) ended at Saturday midnight in its traditional apotheosis of fire, fireworks and thunderclaps. The biggest thunderclaps had roared all week like artillery barrages. It's a peculiarity of the Valencians that they're brought up to take childish delight in loud noise. The minority who can't take it flee the city for the week. But now calm is restored and it's possible to think again.

On March 7, I posted about how important good ambient and working conditions are for effective interpreting. Unforeseen, the March 17 post relayed Lionel Dersot's experience interpreting at Sendai under very poor conditions. One remark of Lionel's in particular struck a professional chord:

“There is no note, no note taking, in windy, at times snowing environment, forget everything about note taking.”

Expert Interpreters will have immediately recognised the significance of that.

All interpreting requires short-term memory in order for the interpreter to keep in mind what the speaker has just said. For simultaneous interpreting, which is never really quite simultaneous, it's a matter of up to three seconds. Short consecutive interpreting needs longer, depending on the span of the ‘chunks’ into which the original is segmented. Long (or full) consecutive may require a much longer memory span, commonly three to five minutes but up to half an hour or more in extreme cases.

Individuals vary greatly as to the memory retention they’re capable of. There are tales of legendary interpreter prodigies like the Kaminker brothers, who were interpreters at the League of Nations and later the United Nations and the Council of Europe:

“The end of the era of the consecutive system in the United Nations had its glorious moment. The noted Latin-American statesman and orator, Señor Fernando Belaúnde of Peru made at the General Assembly a long political speech in Spanish which was translated into French by one of the famous brothers [Georges and André] Kaminker. M. Kaminker reproduced every significant phrase, every telling pause, every emotional tone and even every dramatic gesture, and, having used no notes at all, sat down amid a thunder of applause."

Indeed André Kaminker had eidetic (photographic) memory. He was undoubtedly helped by the fact that long consecutive was the standard method used in conference interpreting in his time, and so his generation got a lot of practice at it (see Image below).

Interpreters who are mere ordinary mortals, however, need help to remember speech accurately for more than a few seconds, which is the 'natural' span. That help takes the form of the notes they take as they listen. They may even need notes for short consecutive, especially for details like names and numbers. I’ve several times witnessed Native Court Interpreters come a cropper over names, times, etc., because they hadn’t learnt to take notes. Interpretation school programmes usually include a module, sometimes a whole course, on note-taking; and students are taught to bring a suitable notepad with them to their assignments. Taking away consecutive interpreters’ notes is like kicking out a crutch from under them: they stumble. But it can happen, as we have seen, so the Expert Interpreter ought to cultivate memory and never rely entirely on note-taking. As Lionel puts it: ”But there is mind note taking for sure. How to take notes with fingers, a future book.”

Image: André Kaminker at work in Paris in 1949. He's the man in the light suit at the far right of the table listening intently to the speaker in the middle. Photo by Nat Farbman for Time, Inc.
Posted by translatology at 3:15 AM