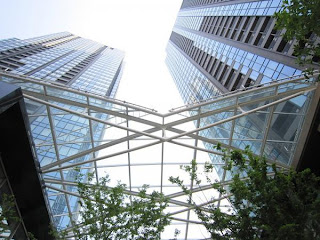 I was thinking of something for this blog when the news of the Japanese earthquake started to come in and absorbed all. The news – a lot of it in translation of course: Japanese TV feeds and press conferences with text in Japanese and English voiceovers (we were watching CNN). Then the tsunami – a Japanese word (literally harbour wave) that has been adopted into English. And now the nuclear 'incidents'.

Like those of many other translation blogophiles, my thoughts turned to Lionel Dersot, our 'window on Japan' and author of the blog Liaison Interpreter (there's a link to it in the right-hand column). That blog gives little information beyond reassuring us that he's alive and ready for work despite the fact that

"all work has vanished or is about to thin out in the atmosphere like a deadly cloud. The only possible work so far is to accompany foreign TV crews. They want to go North. They are scrambling to find 'language helpers'. Some dare ask for interpreters."

However, he also posts a blog in French, Tokyo: Journal de résidence au Japon, which is more descriptive (the English translation is mine):

"The shock was fluid. I was at the post office in south Mita, having left some clients just five minutes earlier. The second shock, which came when I was on Hibiya Avenue itself, was no less scary, like being on a moving pavement. Many people were looking in great alarm towards the glassy Sumitomo building [see photo], which was twisting and reflecting another building that was doing the same thing. Buildings that reflect are nightmares."

"Outside the hardest-hit regions, Japan is funtioning or will soon be functioning again... The sound of the delivery boy pushing the morning newspaper through the letter box is a sign that services are normal."

Meanwhile, the members of a professional network, Freelance France Japon, are offering their services on a voluntary basis for people who are experiencing communication problems.

Thank you, Lionel, for keeping us posted.

Image: scmp.com
Posted by translatology at 4:27 AM