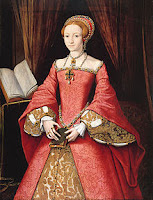 When eleven-year-old Lady Elizabeth, the future Queen Elizabeth I of England, translated a long French religious poem in 1544 as a present to her mother Catherine Parr, the last wife of Henry VIII, she clearly belonged to the pro bono category.

However, she may also have done it as an intellectual game inspired by her Renaissance education. In our  paper Translating as an innate skill we mentioned children who translated between their parents even though they were aware that the latter understood one another without assistance.

Here's an extract from an earlier post on this blog about Elizabeth as translator:

"[The French poem] L'âme pécheresse was only the beginning of Elizabeth's lifelong affection for translating. She must have enjoyed doing it, for itself or for the prestige it gave her in the culture in which she had been educated. Translating was a major element in Renaissance culture and its value was justly recognised. She was an impressive polyglot who knew Latin, French, Italian and Spanish. Over the next four decades, amid the tumultuous affairs of her realm, she produced a considerable body of translations.
"They include her renderings of epistles of Cicero and Seneca, religious writings of John Calvin and Horace's Ars Poetica, as well as Elizabeth's [own] Latin Sententiae, drawn from diverse sources, on the responsibilities of sovereign rule and her own perspectives on the monarchy."

To retrieve the post, enter Elizabeth in the Search box on the right.

Now another document has unexpectedly come to light that reinforces the above. The discovery is the result of some clever detective work.

"A manuscript written by Queen Elizabeth I has been discovered after lying unnoticed for more than a century.
"A literary historian [John-Mark Philo] from the University of East Anglia made the startling find in Lambeth Palace Library in London. [Lambeth Palace is the London residence of the Archbishop of Canterbury,]
"He turned detective to piece together a series of clues to establish that the queen was the author of the writings.
"The work is a translation of a book in which the Roman historian Tacitus wrote of the benefits of monarchical rule."

The detective work required an analysis of Elizabeth's "messy" handwriting and even her private letter paper. Her known translations were usually done in her own handwriting

"Philo noticed that the watermarks on the paper stock used for the translation – a rampant lion and the initials GB, with a crossbow countermark – were those used for the queen’s private correspondence and translations. But there was only one translator at court in the late 16th century known to have translated any of Tacitus’s Annals: the queen herself, whom her contemporary John Clapham ´[historian and poet] described taking 'pleasure in reading of the best and wisest histories, and some part of Tacitus’s Annals she herself turned into English for her private exercise'."


Perhaps she did the Tacitus translation partly for her own self-instruction. But we can scarcely escape the conclusion that it's yet another proof of how much, from childhood to advanced age, she enjoyed translating.

Posted by translatology at 3:11 AM