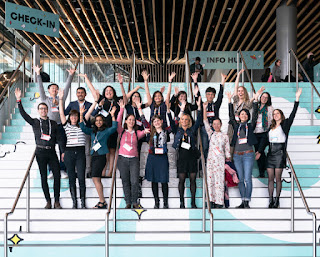 Back in 2011 there was a post on this blog about the volunteers who translate articles for Wikipedia and about the research being done on them by Julie McDonough Dolmaya of York University in Toronto. To retrieve it, enter julie in the Search box on the right. Now there's another ‘knowledge distribution’ organization that depends on crowedsourcing its translations. It’s TED. “TED Conferences LLC (Technology, Entertainment, Design) is a media organization that posts talks online for free distribution under the slogan ‘ideas worth spreading.’”  There’s a link between the two groups in that the level of discourse in their texts is roughly the same; that is to say, serious and often scientific without being extremely academic. It requires expert translators who can satisfy critical editors and readers.

Interesting translator information is available about the 2019 TED Conference, which was held in Vancouver this month (see Source below). It’s unusual for organizations to provide so much data about their translators but TED obviously believes in their importance. It musters 33,527 translators, who together have done 145,577 translations into 116 languages. Imagine what this would cost if TED had to pay for it! TED doesn’t say, however, whether it also uses machine translation.

The translators
According to TED itself, “TED Translators are a global community of volunteers who subtitle TED Talks.” They should be fluently bilingual in both source and target languages. They should be especially fluent in the transcription language (i.e., the language in which the talks are transcribed for written distribution in the original language). They. should be knowledgeable about subtitling best practices. They have available a free online subtitling tool called Amara to subtitle talks and collaborate with other volunteers. Note that a translator training or qualification is not a requirement; although, as we shall see, many of them do have one.

For TED2019 there were supposed to be 18 translators, though I’m ashamed to say three of them were refused Canadian visas.. Let’s divide them into two groups.

a)  Professional Expert
Karin Valles (Mexico). A professional freelance translator. Born and raised in Ensenada, Mexico. Her passion for languages led her to study translation at the Universidad Autónoma de Baja California (UABC), where she developed a keen interest in multimedia translation.

Carolina Aguirre (Brazil).  Translator and subtitler. Lives in São Paulo. Has had an intense interest in languages – particularly English – from an early age, but it wasn’t until she discovered TED and TED Translators that she realized her passion for translating and subtitling too. This discovery also inspired her to switch her profession from law to full-time translation, and she says she’s much more satisfied by her current work.

Tatiana Lebedeva (Russia). Born in Ekaterinburg. Now lives in Prague, where she studies English literature and linguistics, teaches English as a foreign language and works as a freelance translator.

Moe Shoji (Japan). PhD student. Originally from Japan but has lived in Sheffield, England, for the last seven years while studyng for her PhD in theatre and performance studies. Has an MA in the same field, in addition to degrees in both French and English literature. Teaches Japanese. Says that translating is “very much intertwined with my PhD studies – so much so that my first submitted thesis contains this acknowledgment: ‘I would also like to say thanks to TED Translators, which has been a productive procrastination for me to engage with whenever I find myself in a writing cul-de-sac.’” Thus her prolific output as a TED Translator. Aside from studying and translating, she is an aspiring literary translator.

Silvia Allone (Italy). Sales manager and translator.  Lives in Milan. Has an MA in foreign languages and literatures (English and French) from the University of Milan. Currently a sales manager for several Italian and multinational companies, and also works as a freelance translator. About her experience with TED Translators, she says, “TED Translators has made me realize how amazing and rewarding it is to help spread powerful and inspiring ideas to people all across the world who don’t speak a second language – particularly since I strongly believe that communication brings people together more than anything else.”

Masoud Motamedifar (Iran). Translator and coordinator from Bam. MA in both translation studies and business management, and currently works as a translator and an office coordinator at a holding company in Iran. His passion for learning and sharing insightful knowledge and content is what led him to join TED Translators. “I wholeheartedly believe that translating and spreading powerful ideas as far and wide as possible can effect substantive change in the world”. Enjoys traveling and immersing himself in different cultures.

b)  NPIT translators
Seongje Hwang (South Korea). Software engineer. After studying computer engineering at university, he began his career as a financial technology developer and, propelled by his fascination with cutting-edge technologies, utilized TED Talks to school himself on such advancements. He also cultivated a deep interest in TED Talks which address sociocultural issues. He joined the TED Translator community in order to share far and wide the talks that inspire him, as well as to discover talks that animate his fellow translators.

Talia Breuer (Iarael). Born and raised in Haifa. Currently manages a team at a startup enterprise that’s working to implement a sharing economy in the country.

Bianca-Ionidia Mirea. PhD student. Originally from Romania, she has spent much of the last decade living, studying and working in various parts of the world, including China, India and the UK. She credits her time in these three countries especially for introducing her to an array of new ways of thinking and living.  She recently completed her MA in human resources management from Leeds University Business School, and she's about to begin pursuing her PhD in the study of the emergence of new forms of work in the digital economy.

Ly Nguyên (Vietnam). Born and raised in Vietnam. Currently finishing her studies in architecture at Hanoi Architectural University. In addition to her fascination for the aesthetics of words in both the design and calligraphy mediums, she “loves languages and translation.”

Jinchuan Ge (China). From eastern China. Now a student in economics and commerce at the University of Adelaide in Australia. He’s been both a TED Translator and involved with various TED and TEDx conferences for more than five years. Has also studied abroad in the USA at Case Western Reserve University in Ohio.

Urjoshi Sinha (India). Currently a PhD student in computer science and a graduate teaching assistant at Iowa State University. Her research is in software engineering. She cites her dedication to minimizing impediments to the free dissemination of knowledge as one of the key factors that inspired her to join TED Translators.

Frank Zegarra (Peru). Electronics engineer. Born and raised in Lima. Holds a degree in oil and gas engineering Is currently a process safety manager for pipeline transportation for an oil and gas company. His TED Translators epiphany occurred after he watched his first TED Talk, Pranav Mistry’s The thrilling potential of SixthSense technology: “It was then when I realized how amazing it is to have free access to such stimulating information, as well as the importance of transmitting these ideas to as large of an audience as possible, regardless of borders, customs or beliefs,” he says. “And so I began volunteering with TED Translators.”

Tanja Daib (Germany). PhD student in computer science. Schooled in her home country, Relocated to Argentina for a year to teach German, then moved to Edinburgh for a BA in cognitive science. Now lives in London, where she’s studying for her PhD. JJoined TED Translators in 2012 to “help make TED content more widely accessible, and to have a productive way of procrastinating.”

Jules Daunay (France). Technology developer. Born and raised in Brittany, currently resides in Paris and works as a technology developer for a startup enterprise focused on creating innovative open-source development tools. Has also lived in Moscow, where he attended Moscow State University. In addition, earned master’s degrees in Paris from both Sciences Po and the Sorbonne. His passion for technology is matched by his deep interest in other cultures, and he attributes this combination to his decision to join TED Translators. “I love being part of a global community in which I can introduce extraordinary new ideas to French speakers around the world.”

Sameeha Atout (Palestine). From Nablus, BSc in medical analysis, and currently works as an embryologist. She plans to pursue a degree in the field of genetics research. A staunch believer in Mahatma Gandhi’s maxim “Be the change you wish to see in the world,” and she credits these words for her decision to join TED Translators. “I always try to take any opportunity I can to change our world for the better,” Sameeha says. “When I discovered TED Translators, I realized I’d found an excellent way to put Gandhi’s words into action: I could help spread important ideas and knowledge across languages and borders, while at the same time increasing the amount Arabic content available online.”

Saba Rezaie (Iran). BSc in physics from the University of Tehran, Lives in New York.  She initially moved to New York to earn her master’s degrees in both economics and business administration; afterward, She began her current job as a data analyst at a financial institution. As a bilingual speaker and a fervent believer in education and the free exchange of knowledge, she’s found a natural home at TED Translators.


Grigor Janikyan (Armenia). Youth activist. Born and raised in Armenia. BA in management from the French University in Armenia. In 2015 he founded United Youth Union, an Armenia-based “non-profit organization committed to youth development and empowerment.”

Comments
The most striking feature of these translators is their enthusiasm and idealism; they have a missionary zeal. In this respect they are comparable to the church interpreters who have been mentioned many times on this blog, though they serve a differenct god, Minerva. Also remarkable is their level of education; they almost all have university degrees, which explains why they possess the cognitive competence to deal with TED translations. They come from very widespread and varied countries and cultures, but.most of them have travelled widely and that has probably diminished the mental differences.

On the face of it, there is no significant difference between the competence and output of the Expert and the NPIT translators, though that's a question which calls for further research.
Source