This post is offered as a contribution to the United Nations International Year of Indigenous Languages (IYIL). 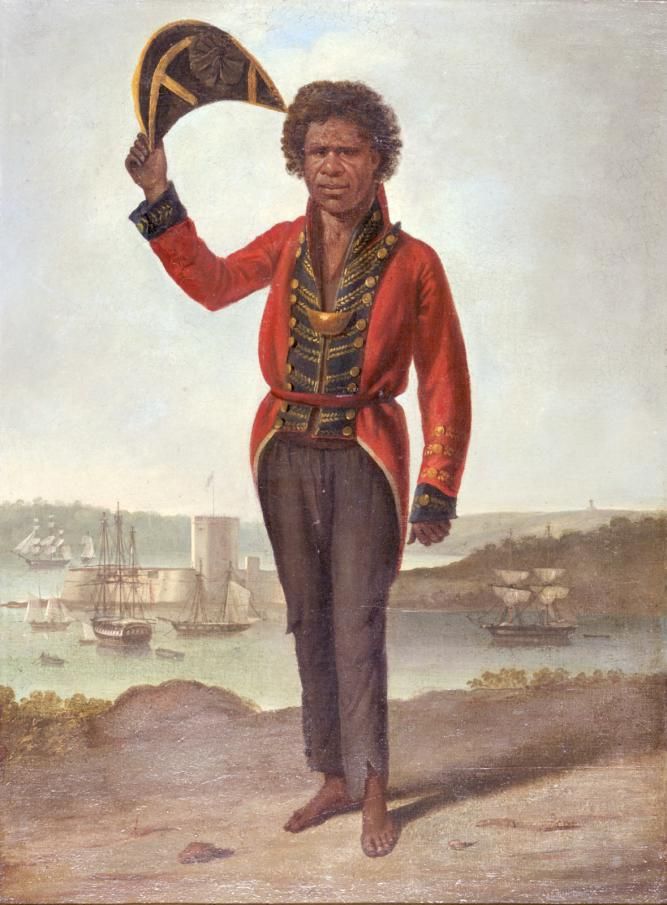 When you go researching with Google, the links may lead you far from where you expect. Thus it was my interest in cats that led me to the first documented Australian Aborigine interpreter. And in between the two came the link to Capt. Matthew Flinders of the British Royal Navy. He was the first mariner to circumnavigate Australia, map its coastline, identify it as a continent and call it Australia. That was in 1801- few weeks ago his early-nineteenth-century grave was discovered in an excavation under – of all places! – Euston railway station in London; but that’s another story. My feline starting point was that on his epic voyage he took with him his ship’s faithful cat Trim, named after a character in the popular eighteenth-century novel Tristram Shandy. Flinders became so admiring of Trim that he wrote a heartfelt and elegant tribute to him, which I warmly commend to all cat lovers (see Sources below).

And then a subsequent link led me from Flinders to another of his faitful companions, his Aborigine interpreter Bungaree. When Europeans discovered Australia in the eightenth century they were broght into contact with peoples whose cultures were perhaps the oldest surviving human civilisations. It’s proof – if proof were needed – of the universality and variety of human language that “in the late 18th century, there were more than 250 distinct Aboriginal social groupings and a similar number of languages or varieties.”

In that fertile environment we can be sure that there must have been some interpreting from early times among the languages. However, Bungaree is the first documented Abriginal/English interpreter. There's an excellent article about him in Wikipedia and I can do no better than to quote extensively from it, with due thanks to its anonymous author(s).

“Bungaree, or Boongaree (1775 – 24 November 1830) was an Aboriginal Australian from the Kuringgai people of the Broken Bay area north of Sydney, who was known as an explorer, entertainer, and Aboriginal community leader. He is also significant in that he was the first person to be recorded in print as an Australian, and thus the first Australian to circumnavigate the continent...

Having moved to the growing settlement of Sydney in the 1790s, Bungaree established himself as a well-known identity, as one able to move between his own people and the newcomers. He joined the crew of the HMS Reliance on a trip to Norfolk Island in 1798, during which he impressed the then midshipman Matthew Flinders. In 1798 he accompanied Flinders on the sloop Norfolk on a coastal survey as an interpreter, guide and negotiator with local indigenous groups. Despite the lack the of a common language, the indigenous people persistently sought Bungaree out to speak to instead of Flinders. And his mediation skills were greatly appreciated by the Europeans with whom he shared the ship. In 1799, to reach an agreement with local people in one particular situation, Bungaree gave them a spear and a spear thrower as gifts, showing them how to use them. It is referred to by Bronwen Douglas as a ‘cross-cultural act, signifying a reciprocal rather than a hierarchical relationship and challenging the reified notion of ‘cross-cultural’ as contact between opposed, homogenized ‘cultures’, adding that ‘the Moreton Bay people probably took Bungaree for the leader of the expedition and the white men for his followers.’

“He was recruited by Flinders on his circumnavigation of Australia between 1801 and the Investigator... Flinders noted that Bungaree was ‘a worthy and brave fellow’ who, on multiple occasions, saved the expedition. Bungaree was the only indigenous Australian on the ship - and as such, played a vital diplomatic role as they made their way around the coast, overcoming not inconsiderable language barriers in places. According to historian Keith Vincent, Bungaree chose the role as a go-between, and was often able to mollify indigenous people who were about to attack the sailors, by taking off his clothes and speaking to people, despite being in territory unknown to himself. Flinders later wrote in his memoirs of Bungaree's ‘good disposition and open and manly conduct’ and his kindness to the ship's cat,Trim...

“However Bungaree's important role in the exploration of Australia appears to have been almost forgotten. There are statues to Flinders and even the cat Trim, but as at January 2019, not a single statue to Bungaree recognising his achievement”

Such is the lack of appreciation of the vital roles, both linguistic and extralinguistic, played by interpreters. Perhaps too there is some racism in this neglect of Bungaree. Yet it hasn’t always been so: there’s an island, located off the Kimberley coast of Western Australia, called Boongaree Island.

“Bungaree continued his association with exploratory voyages when he accompanied Captain Phillip Parker King to north-western Australia in 1817 in the Mermaid, amongst other things giving advice on which plants were safe to eat. “

[Parker] named the island after him, Meanwhile,

“Bungaree spent the rest of his life ceremonially welcoming visitors to Australia, educating people about Aboriginal culture (especially boomerang throwing), and soliciting tribute, especially from ships visiting Sidney. He was also influential within his own community, taking part in corroborees, trading in fish and helping to keep the peace.”

At the risk of belabouring the point, I must point out that in the absence of any interpreter training, tradition or accreditation in eighteenth-century Australia, Bungaree could only have been a Natural Interpreter. But his employ by the colonial administration and the Royal Navy made him a Professional.

Matthew Flinders. Trim: the story of a brave, seafaring cat who, in the company of Matthew Flinders, circumnavigated the globe in the years 1799-1804. Collins, 1977. Flinders wrote it in 1809 during his captivity on Ile de France (Mauritius) but it lay overlooked among his papers for more than a century.

“By the end of his life, he had become a familiar sight in colonial Sydney, dressed in a succession of military and naval uniforms that had been given to him. His distinctive outfits and notoriety within colonial society, as well as his gift for humour and mimicry, especially his impressions of past and present governors, made him a popular subject for portrait painters,”

Posted by translatology at 11:34 PM