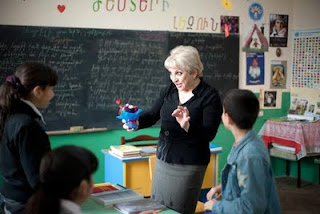 Visual language interpreters (see Terms below) haven't been adequately represented on this blog. They've only been mentioned very occasionally, for example in connection with church interpreting. Perhaps it's because I've had little contact with them myself. I did work with some of them at conferences in Canada, but that was long ago; and I don't have any contact with the deaf community in Spain, though I see Spanish, Catalan and Valencian Sign Language interpreters on TV. So this post is intended to make partial amends. It's drawn from a report that has come unexpectedly from Armenia, and hence it involves Armenian Sign Language (see Terms below). It begins:

" 'I am Zubeyda. My parents are deaf. I was born and brought up in a family where my mother’s first words to me were in sign language. I have perceived the world through this language,' says specialist in sign language translation Zubeyda Melikyan, 53 years old, who was Armenia’s first TV sign language interpreter (see photo)."

Zubeyda was born and brought up in Gyumri, a provincial town. She had a hard childhood because of people's attitude to the deaf there, and for many years she was ashamed of her parents. But it doesn't seem to have hindered her language development.

"'In fact, I have been doing sign language translation since I was two,' Zubeyda says."

This is the Natural Translation stage. Two may seem very young, but we should bear in mind that

a) She doesn't say precisely when. Two years exactly? Two years and nine months? At that age, a few months make a big difference.

b) She doesn't say what she was translating. At age 2, most children are still talking at the level of 'single word sentences'. We know from the literature that other children have been observed doing that kind of translation at that age.

A little later on (age not stated), circumstances made her a Language Broker. We can deduce it because she tells how she used to accompany her mother to market, so she must have helped her mother by interpreting.

Furthermore, we can deduce that at latest once she went to school she became to some degree tri-lingual. This because, in her time, Armenia was part of the Soviet Union and therefore Russian was compulsory in all schools.

She must have had a good secondary school education, because she went on to graduate from the local Teacher Training College. By that time, her education would certainly have made of her a Native Translator. From there she became Professional:

"I wanted to continue my education, but deaf people immediately took me to work as their translator."

Thus, she developed into an Expert Translator:

Among her many activities, she has done church interpreting.

"Zubeyda says the Lord’s Prayer in sign language. She has also translated a holy mass. Clergyman of Holy Trinity Church in Yerevan Ter Yesayi Artenyan supported her to write the dictionary of religious sign language."


Terms
Visual language interpreter. A cover term that's needed because there are several other forms of communication between deaf and hearing people besides sign language, the best known being lip-reading, and there are interpreters for all of them. More perhaps some other time.

Natural, Native, Expert and Professional Translator. For definitions of these terms within a developmental model, see the post of November 12, 2010, which you can find quickly by entering "essential definitions" (with the quotation marks) in the Search box on the right

On very young interpreters, see Brian Harris and Bianca Sherwood, Translating as an innate skill, in D. Gerver and W. H. Sinaiko (eds.), Language Interpretation and Communication, Oxford and New York, Plenum, 1978, pp. 155-170. The book is out of print, but a digitised copy of the paper is available free from translatology@yahoo.com.

Image: Photo by Nazik Armenakyan for ArmeniaNow.
Posted by translatology at 12:26 PM