From Natural to Expert Translator, With Essential Definitions 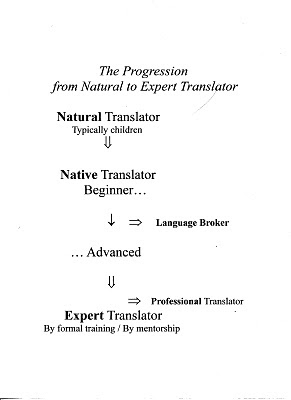 This blog constantly bandies about terms like Natural Translator and Native Translator; and although there’s a side panel telling readers how to find definitions of them, it requires going back a long way. So I’ll take a pause and try to make them clearer. To that end, here's a diagram showing their relative positions in the development of translation ability and skills.

The terms mean what I want them to mean, which may well be different from the way other people use them. Especially the term Professional Translator, which professional translators themselves and people close to them such as translation teachers – including myself back in the 1970s – conflate with Expert Translator. To me now, Professional Translator means someone who does translating as a livelihood, whether full time or part time. The reality is that many professional translators are not well trained or qualified, even though you have a right to expect them to be if you’re paying them well (but not if you’re underpaying them). And on the other hand, there are many people who can translate as well as the Experts but who don’t do it as a profession. They’re common among academics; colleagues have occasionally taken time from their own work to translate an article for me. When Samuel Moore, a lawyer by profession, translated the Communist Manifesto into English for Marx and Engels – surely a challenge with them looking over his shoulder – he did so out of friendship and conviction. (See post of May 2, 2010.)

Language Broker is a term that wasn’t coined by translation specialists but by educationists and sociologists. Language brokers are typically young Native Translators, sometimes Natural Translators, who interpret in a particular social context: that of immigrant communities whose members need to communicate with the host community. The term is new; my own first encounters with the phenomenon came in the 1970s before the term existed. I don’t like the use of broker as if it entailed negotiating a deal – intermediary would be better, as in the German Sprachmittler – but it’s here to stay.

Coming shortly to this blog: A mediaeval tale of alphabets.
Posted by translatology at 2:57 AM