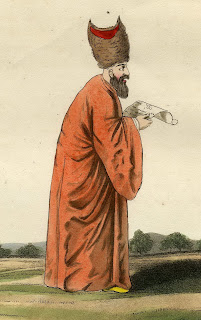 When, for a couple of years, I was a history student at university in London, my tutor was Bernard Lewis. He was encouraging and very helpful to me. I didn’t realise at the time how privileged I was, because it happened in the days before he was brain-drained to the USA (Princeton) and became a well-known public guru of Islamic and Middle East history and affairs. At that period he was on a lower academic rung as a young Lecturer; however, he was already a multilingual authority on the history of the Ottoman (or Turkish) Empire, the Muslim regime that ruled most of the Middle East, North Africa and the Balkans for nearly five centuries until 1918. So when, in 2004, Professor Lewis brought out a book with the title From Babel to Dragomans, I knew at once who the dragomans were that he was referring to.

Those dragomans were the official translator-interpreters (there was no distinction between the two functions) of the Ottoman administration at various levels. The most prominent of them were for a long time Constantinople Greeks.

They were also the official translator-interpreters in the embassies and consulates of the Western powers that wanted to negotiate with the Turks or do business with them. The dragomans of the Westerners might be recruited locally or they might be their own nationals specially trained. The best-organised Western corps of dragomans was that of the French. Under Colbert, a school was established in Paris specially for training dragomans from childhood onwards. Among the other powers were the British, who, like the French, maintained their dragomans until the First World War (see References below).

Since the dragomans were Professional Experts, they’re beyond the scope of this blog. However, Lewis tells an anecdote that does have some relevance here.

One of our earliest accounts of a diplomatic communication in the Middle Ages comes from an Arabic chronicler called Awhadi. He tells us that a European queen, Bertha the daughter of Lothar, queen of Franja [Frankland] and its dependencies, sent a gift and a letter to the Abbasid Caliph al-Muktafi in the year 293 of the Hijra (906 CE). With them was a further message, not included in the letter, but addressed directly to the Caliph. The letter, says the Arab historian, was written on white silk ‘in a writing resembling the Greek writing but straighter’ (presumably this was Latin writing: the queen from Italy would obviously have used the Latin script).
How did they read this message in Latin? Who would there have been in tenth-century Baghdad that could read a letter in Latin? Awhadi tells us: they searched for someone to translate the letter, and in the clothing store they found a Frankish slave who was able ‘to read the writing of that people’. He was brought into the Caliph’s presence, where he translated the letter from Latin writing into Greek writing. Then they brought the famous scientific translator Ishaq ibn Hunain and he translated it from Greek into Arabic.

You’ll expect me to remark, I’m sure, that even the famous Professional Translator couldn’t proceed without the prior contribution of a humble bilingual slave in a clothing store. But there’s more to it.

First there's the apparent confusion between writing and language, as in “he translated the letter from Latin writing into Greek writing.” Of course the slave didn’t just transliterate the Latin letters into Greek ones, which wouldn’t have helped Ishaq much; he translated the message into the Greek language. It may be just an artefact of English translation, since the Arabic word kitâbah – I presume it’s that; Lewis doesn’t give the Arabic – can mean either a writing system, a script, or a piece of writing, a text. On the other hand, the identification of script with language would be understandable in the circumstances, since Latin, Greek and Arabic each uses a different alphabet that is characteristic of it.

What is certain, however, is that the slave and Ishaq each had to know two of those alphabets; and the slave, living in Arab Baghdad, must have known all three. What I’m getting at is that to be fully bilingual in a literate society, it’s not enough to be able to pronounce two languages; you have to be able to read and write their scripts. You have to be biliterate in that sense. Writing systems have become essential gateways.


Term
Dragoman: Note the plural dragomans; not dragomen, which is seen sometimes but is etymologically incorrect. It’s a very old and widespread synonym of interpreter. Lewis traces its history back to Assyrian ragamu, meaning to speak. It entered English by way of Old French, Italian, Byzantine Greek dragoumanos, Arabic turjmân, Aramaic, etc. The meaning Arabic or Turkish speaking local tourist guide came in with modern tourism in the 19th century.

Sir Andrew Ryan, KBE, CMG., 1876-1949. The Last of the Dragomans. London: Bles, 1951. Ryan, who was what the title of his book says, rose from dragoman at Constantinople to ambassador to one of the Balkan countries. Difficult to find, but Amazon has books about another British dragoman, Gerald Fitzmaurice, and Johannes Kolmodin, the last dragoman of the Swedish embassy. Fitzmaurice’s title was Chief Dragoman, so there were others under him. We know, for example, that Ryan started as Second Dragoman.

David Diringer, et al. The Alphabet: a Key to the History of Mankind. Several editions. Available from Amazon. The classic work on the subject.

Image: 'Dragoman', from the website of Dr. Hans-Peter Laqueur, http://www.hplqr.de/
Posted by translatology at 12:23 AM