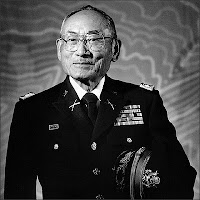 Continued from the previous post.
That the interpreters for the Trials weren't up to the level of Expert or Professional Translators doesn’t mean they had no acquaintance with translation. Some of them were officials from the Foreign Ministry, one at least was a journalist, one a university student. They were therefore presumably at some level of Native Translator.

Nevertheless, the American organisers of the interpreting were faced with two problems:

* Their interpreters were untrained and inexperienced
* As the interpreters had to be recruited in Japan, they might be suspected of bias in favour of the accused.

They therefore put in place a system of checks:

Monitors from officials of the Allied Powers would be relied upon to check and correct the interpretation.

Here bilingualism enters the picture again, but from a different direction. There were four monitors.

All four were Kibei Nisei, second generation residents of the US who were born in US but raised and educated in Japan, and then returned to the US before the outbreak of WWII. They were bilingual (English and Japanese) and were expected to be well versed in Japanese culture. During WWII, they worked for ATIS (the Allied Powers’ Translation and Interpretation Section). They were involved in intelligence activities such as tapping lines of communication, code breaking, prisoner interrogation, information collection from diaries, memos and other materials seized from Japanese soldiers killed during the war. They had gathered sufficient knowledge about WWII to perform to perform their tasks at the Tokyo Trial.

They were therefore Professional Expert translators by 1945, with much of the background knowledge required.

One such Japanese American was Steve Shizuma Yamamoto, who went on to have a long and successful career in the American Army (see photo). He had acquired his experience as an interrogator, having conducted no fewer than 3,000 interrogations in New Guinea. He isn’t mentioned by Watanabe, perhaps because he didn’t take part in the first trial.

In spite of the time it took, the method of interpreting was consecutive interpretation; not simultaneous, which was still very novel. The task of the monitors was facilitated by the use of consecutive. Actually, the same model of IBM simultaneous interpretation equipment as was used at Nuremberg was installed at Tokyo, but it wasn’t used in the same way. Watanabe doesn’t explain why not, but we can surmise some of the reasons:

* The absence of an organiser in Tokyo with the clout that Léon Dostert wielded at Nuremberg as personal interpreter to Eisenhower.
* There was no time to train the inexperienced interpreters for simultaneous, and in any case there were no trainers in Japan.
* Something that was told me many years later by a Japanese interpreter, Sen Nishiyama, who had begun his career in that era: the Japanese believed that English-Japanese simultaneous would be impossible because of the wide difference in sentence structure between the two languages. They were wrong. Under American pressure during the Occupation, simultaneous was in fact introduced into Japan in the 1950s.

Above the monitors was yet another tier, the Language Arbitration Board. Its members were unilingual English. Their task was to decide on any dispute or difficulty that could not be settled by the monitors. They were concerned mainly with terminology.

Once the interpretation of a disputed word was resolved by the Board, the arbitrated translation had to be used for the rest of the trial.

Some of the difficulties arose from cultural differences. There were moments when even Tojo intervened to try to clarify.

It is undeniable that [in some instances] Tojo’s rapid understanding and response, as well as his adamant assertion of translation errors, led to language arbitration… It must be added that the Tokyo War Crimes Tribunal recognized the importance of cultural gaps.

The last part of Watanabe’s article is devoted to examples of interventions by interpreters and monitors, of arbitration, and particularly to the dispute over the translation of the Japanese word taian: did it mean reply to a proposal or counter-proposal? A lot depended on that single word.

Though the Tribunal has been criticised as unjust and even some of the judges issued obiter dicta at the time questioning its procedures, standards of evidence and vengeful ‘show trial’ nature, this criticism has not been directed at the interpretation. On the contrary,

There were no significant translation errors, because whenever erroneous or inappropriate interpretation was rendered by an interpreter, the monitor pressed a buzzer, lit a red light and corrected the interpretation.

The monitors carried out their painstaking work within their capacity to secure the Japanese accused’s right to a fair trial.

Photo
http://www.warofourfathers.com/war/new_guinea_yamamoto015.html.
A magnificent Karsh-quality portrait. A pity they don’t name the photographer.
Posted by translatology at 2:53 AM