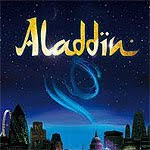 This post is the conclusion of the two preceding posts. Please read the other ones first.

My own first contact with the Nights came about when I was barely six years old; and not from the print version, not even from an adaptation for children, nor from Disney - after my time! - but from a peculiarly English theatrical institution, the Christmas pantomime. I was taken to see Aladdin and his Magic Lamp.

Though it began in the 19th century and had affinities with the music hall, live performances of ‘panto’ are still going strong for a few weeks each year in theatres all over Britain, even with the competition from the other media. So what is it?

Traditionally performed at Christmas, with family audiences consisting mainly of children and parents, British pantomime is now a popular form of theatre, incorporating song, dance, buffoonery, slapstick, cross-dressing, in-jokes, audience participation, and mild sexual innuendo. There are a number of traditional story-lines, and there is also a fairly well-defined set of performance conventions… along with a… 'guest celebrity' tradition, which emerged in the late 19th century.

One of the “traditional story lines” is Aladdin. The “performance conventions” require that Aladdin be played by a woman showing off shapely legs; and that his mother, named the Widow Twankey (or Twanky), be played by a man in drag, a so-called pantomime dame. But the outline of the original story is retained, as are the Chinese location, the Sorcerer, and of course the Genie (Arabic jinniy) of the Lamp.

As for the "guest celebrities", the one who’s made the headlines this year is Pamela Anderson, a star of the American TV series Baywatch. She’s playing this week in the panto at the New Wimbledon Theatre in a suburb of London. Surprisingly, considering that she’s famous for her curvaceous body, she’s not playing the title role but the Genie of the Lamp. That’s a new twist.

And that’s how a personage with a thoroughly Muslim Arabic name (it means Ennobled of the Faith) and etymology - even the double dd in the middle is a vestige of Arabic - came to figure among the thoroughly British English icons of Christmas. From one folklore to another, a remarkable story of popular cultural transfer through translation and intersemiotic adaptation. The changes are great, the new audience is unaware even of the existence of the original one, yet the essence of the story and the spirit of fantasy and ribaldry are preserved.

REFERENCES
The image is from a poster for this year’s New Wimbledon Theatre pantomime production of Aladdin. Note the hint of Arabic calligraphy in the style of the lettering and the two dots on the i.

There are articles on Pantomime and on Aladdin in Wikipedia.
Posted by translatology at 8:19 AM