Akage No Anne (Anne of the Red Hair) 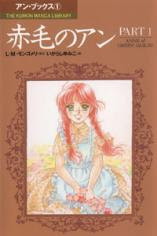 Now for some light relief from semiotics and all that.

In the September 26 post about Louis Hémon, I happened to mention that a long-popular figure in Canadian fiction, Anne of Green Gables (full name Anne Shirley), had become equally popular in Japan - thanks to translation. The novel was first translated into Japanese in 1939 and became part of the national school curriculum in 1952. Now comes this peculiar confirmation from the Toronto Globe and Mail:

A new job for Anne of Green Gables: selling beef to Japan
Georgetown, PEI, native Peter Llewellyn made the initial connection between PEI beef farmers and Japanese businesses who are looking at raising a special Japanese beef cattle breed on PEI [PEI stands for Prince Edward Island, a small, charming province on the Canadian Atlantic coast]… PEI farmers looking to sell Wagyu hope for some help from a home-town heroine… Enterprising farmers on PEI are hoping to crack Japan's stiffly competitive Wagyu beef market by using the lure of Anne Shirley, a revered figure to generations of Japanese women – the ones who decide what is served at weddings.

When foreign fiction in translation is appropriated by the advertising industry, you can be sure it’s entered the popular culture of the receiving country.

Lucy Maud Montgomery. Anne of Green Gables. Boston, 1908. Green Gables is the name of the house where Anne is brought up in the story.

Akage No Anne [Red-haired Anne]. Translated by a well-known translator, Hanako Muraoka, in 1939 from a copy belonging to a Canadian missionary, but not published until after World War II.

The image above is from a manga version. The text of the manga has been scanlated by fans (see September 28 post).
Posted by translatology at 2:48 AM