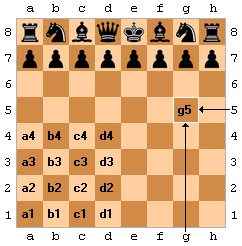 A recent posting (October 21) related how an interpreter friend of mine was caught up in the Karpov-Kasparov exhibition match in Valencia. He’s not a chess player himself, but if he’d been given time to prepare he would have swotted up on the topic, as professional interpreters must often do. However, he was, as I said, brought in at 30 minutes notice.

So he ran into difficulties with the technical descriptions that the TV commentator was giving of the moves, the so-called algebraic chess notations. You know the sort of thing: Ngf3 meaning “knight from the g-file moves to the square f3,” and so on. Fortunately there was a bilingual member of the organizing committee for whom these were no problem, so she translated them.

This is an instance of where the Native Translator scores over the Expert Translator not because of interpreting expertise but because of the expert background knowledge needed. In such circumstances it’s wise to let the Native take over.

Let me add a personal recollection. I remember vividly my ‘baptism of fire’, the first conference I ever interpreted at professionally. The interpreting was simultaneous, in English and French, and it was about the History of Music. Now, I’m not a musicologist or even a musician, but unlike the chess interpreter I was given one week to prepare. I’d read a lot of programme notes for symphony concerts in my time, but only in English. So the first thing I did after signing the contract was buy a little Que sais-je? book on Histoire de la Musique and plough through it. I too had a problem with notation, musical notation; and in the isolation of the booth for simultaneous interpretation, I foresaw that I wouldn’t be able to turn to anybody for help. So I prepared an illustrated glossary something like what you can find today for Music in the Oxford-Duden Bilingual Pictorial Dictionaries.

What’s the difference between Native Interpreters with expert subject knowledge and Professional Expert Interpreters, when faced with a difficulty like chess or musical notation? The former have an advantage in a particular field with which they are familiar, but they are generally limited to that field; whereas the latter must be capable of absorbing knowledge and terminology for new fields very quickly. This is especially the case with freelances, who may be engaged for a board meeting on education one day and a scientific conference on fisheries the next and are expected to cope. It’s something interpretation students have to learn and exercise. I call it Interpreter Versatility.

Posted by translatology at 9:20 AM