The Greatest Ever English Prose Translation 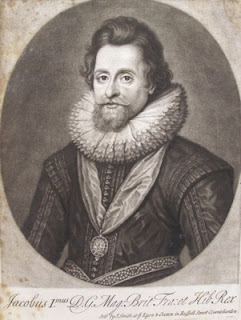 At the Castelló symposium, Ann Corsellis, indefatigable British champion of professional standards for Public Service Interpreters, made me a gift of her own copy of Adam Nicolson’s Power and Glory (P&G). She couldn’t have given me a better present. The year 2011 will mark the 400th anniversary of the publication in London of the King James Version of the Bible (KJV). It will be duly celebrated in England and other parts of the English-speaking world; it’s been announced, for example, that BBC Two is preparing a documentary about it. Reading P&G is a fascinating way to start preparing for it.

It‘s known as the KJV after King James I (ruled England 1603-1625, see portrait), who officially commissioned this direct translation from Hebrew and Greek. More than that, we now know from P&G that he inspired it before it started and kept it under tight supervision and control while it was under way. It’s also called the Authorised Version (AV), because, once it was finished, he authorised it for sole use throughout the Anglican Church.

Yet I notice the high place and ingrained influence of the KJV in English culture is often not appreciated by people of other cultures. When I came to teach at a Spanish university a decade ago, I wanted to copy a page from it for one of my classes. So I went to look for it in the library that served the Department of English Studies. It wasn’t there. Then I asked my students, the majority of whom had a degree in Filología Inglesa (English Language and Literature). Most of them had never heard of it; they all said it hadn’t been covered in their programme of studies. I was shocked. How could they be taught English literature without it?

It’s true that when I was at school in England we didn’t read it in our English classes. We didn’t need to. We were treated to a live reading from it every morning at School Assembly. During my seven years at that school, I listened to a lot of it. From time to time it would be my turn to step up to the lectern and give the reading. It was then that I learned to appreciate its sonority and rhythms and simple sentences. When the original title page says that it is “Appointed to be read in Churches” it means to be read out aloud in Churches. I feel this was an important factor in its style. Bear in mind too that the KJV was written in the era that was the summit of English theatre, while Shakespeare was still writing.

But it’s still a translation, and not exempt from some translationese. Only much later did I find translationese to be the explanation of a feature that used to puzzle me at the Assemblies: Why was it that so many of its sentences began with And when we were being taught in class that we should never begin a sentence with And?

The organization that was put in place for translating and revising the KJV was complex even by modern standards. It had to be, in order to keep the 50 or so translators in line; what’s more, everything was revised and the revision was carried out by committees. Prior to reading P&G, I already knew something about the technical side of the organization from a much earlier book, Ward Allen’s Translating for King James. Contrary to what I wrote in a previous post (October 28) about the role of divine inspiration in religious translations, in the instructions to the KJV translators, says P&G, “There is no hint of inspiration, or even of prayerfulness, no idea that the Translators are to be in the right frame of mind. These are exact directions, state orders, not literary or theological suggestions.” But what Nicolson adds so richly to Allen is the intimate connection between the KJV and Jacobean England (the England of King James). If you’re interested in the social dimension of translation, this is an astoundingly revealing study for you; if you’re interested in the politicization of translation, it’s a must.

Just a single example of the political bias: in the Geneva Bible, a more radically protestant, Calvinist version that had been published in Geneva in 1560, the word tyrant occurs over 400 times; in the KJV, not once.

So much for the translation. More relevant to this blog is the mass of information that P&G contains about the Translators (their title was always capitalized at the time).

Adam Nicolson. Power and Glory: Jacobean England and the Making of the King James Bible. London, 2003. 281 p.; many colour illustrations. Available in paperback.

The Holy Bible Conteyning the Old Testament and the New: Newly translated out of the Originall Tongues: & with the former Translations diligently compared and reuised by His Majesties speciall Commandement /Appointed to be read in Churches. London, 1611. The text is accessible on several internet sites.

John Bois (1561-1644). Translating for King James: being a true copy of the only notes made by a translator of King James's Bible, the Authorized version, as the Final Committee of Review revised the translation of Romans through Revelation at Stationers' Hall in London in 1610-1611 / Taken by John Bois ... these notes were for three centuries lost, and only now are come to light, through a copy made by the hand of William Fulman. Here translated and edited by Ward Allen. Vanderbilt University Press, 1969. With facsimile reproductions.

The text of the Geneva Bible is accessible at http://www.genevabible.org/Geneva.html
Posted by translatology at 6:12 AM