The Arabic Interpreter Who Saved A Thousand Jews 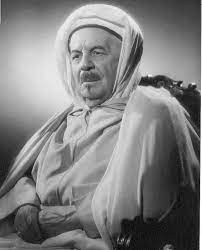 In January 2019, in a post on this blog celebrating 100 years of conference interpreting, there was a mention of the 1906 Algeciras Conference because it was the first major international conference to use an Arabic interpreter. (To retrieve the post, enter algeciras in the Search box on the right.) That was some 70 years before there were Arabic interpreters at the United Nations. The conference was convened by the major European powers and the United States to ratify European intervention in nearby Morocco, only 16 nautical miles away directly across the Straits of Gibraltar to Tangier. The Germans wanted it but eventually the other powers ganged up on them and awarded it to the French. The conference was a long one; it lasted It from January to April. It might have been conducted in French, the standard diplomatic language of the period, had it not been that a key delegate, the Moroccan Vizier Mohammed Ben Abdelsalem El-Mokri, and likewise his companions, only spoke Arabic, so they needed an interpreter. Luckily one was found not far away. He was Elie Cohen from the thriving Jewish community in Tangier. (There were still remnants of the community, mostly old people, when I was teaching in Tangier in the 1980s. Tangier is an Arabic-French-Spanish trilingual city.)  Elie was perhaps the first modern Arabic conference interpreter. You can still stay for a reasonable price at the beautiful Reina Cristina Hotel in Algeciras where the conference took place, an oasis amidst the modern developments of a large container port. When I visited it in 2000 there was a photo of Elie in the hallway together with his visiting card.

Why Algeciras? Obviously its proximity to Morocco and its ferry to Tangier but there were other reasons. Algeciras in the early twentieth century was a resort township that catered especially for the British garrison at Gibraltar, through which it could be reached easily by sea. It had a rail connection to inland Spain and hence to the rest of Europe. And the Reina Cristina was no ordinary hotel. Its architect, Thomas Edward Collcutt, had been the architect of the prestigious Savoy Hotel in London.

And why was the USA invited? To understand this one must know about the long history of American relations with Morocco. They go back to the late eighteenth century and the need for Moroccan cooperation to combat piracy. As a result, the old American consulate in the medina of Tangier is the oldest American diplomatic building outside of the United States.

However, I made one important mistake in the 2019 post. I wrote as if Elie Cohen was the only Arabic interpreter at the conference. I now know that there was also a second Arabic interpreter; and that much more is known about the second interpreter than about Elie Cohen. His name was Abdelkader Ben Ghabrit but he was better known as Si Kaddour Benghabrit. (Si is a dialectal abbreviation of Sidi, a title of respect.)

There are substantial biographies of Benghabrit in Wikipedia and elsewhere, so I will confine myself to two aspects of his life: his work as an interpreter and his relationship with Jews.

He was well prepared to be a conference interpreter, both linguistically and culturally. In his day his country Algeria was under French rule. He received the typical education of the son of a Muslim notable in the Maghreb at the madrasa (local school), memorizing the Koran and learning classical Arabic (the language of the Koran, which is very different from Algerian Arabic). At the same time, he also received an education that reflected the ideology of France's mission civilatrice (‘civilising mission’) under which France would ‘civilise’ the Algerians by assimilating them into the French language and culture. Benghabrit became a Francophile who embraced the ideal of France's mission civilisatrice in Algeria, and as such he was deeply loyal to France and its values.

After studying at the University of al-Karouine at Fez in Morocco, he started his career in Algeria in the judiciary. As a cosmopolitan, sophisticated man, able to straddle two very different cultural worlds, he was able to make himself useful to those who held power. In 1892, he became assistant interpreter at the Legation of France to Tangier; he served as a liaison between North African officials and the French  Ministry of Foreign Affairs. He served as chief of the French Legation in Tangier in the period 1900-1901. Benghabrit was fluent in Moroccan Arabic (which is closely related to Algerian Arabic), which gave the French legation an immense advantage over the legations to  Morocco who lacked personnel capable of speaking Moroccan Arabic, and furthermore he was always well informed about Moroccan affairs. The French diplomat Charles de  Beaupoil rated Benghabrit as one of the most ablest dip lomats he had ever worked with, and as the most able in Morocco. By then Benghabrit held a position in Morocco in the court of the sultan as an unofficial French diplomat.

Sultan Abdelaziz, the ruler of Morocco, was represented at Algeciras by his Vizier Muhammed al-Muqri. Al-Muqri expressed frustration at the translation situation and commented: "We're sitting here like statues; we can't understand a thing of what is said. The Moroccan delegation had no choice but to use Benghabrit although he was officially there in the service of France.

In 1912, he interpreted the negotiations between Sultan Abd al-Hafid of Morocco and the French diplomat Eugène Regnault which culminated in the signing of the Treaty of Fes, and which established the French Protectorate of Morocco. French Resident General Lyautey then rewarded him with a position as head of protocol to the sultan.

At this point I must skip a decade and the First World War and fast-forward to the 1920s.

It was then that the French government decided to construct a mosque in Paris to symbolise the eternal friendship of France and Islam, and memorialise the sacrifice of the tens of thousands of Muslim soldiers who died fighting in support of France during World War 1. Thus the building known as the Great Mosque of Paris was completed in 1926. At the opening of the Great Mosque, Benghabrit in his speeches in both French and Arabic praised the "eternal union" of France and Islam. He was the  natural choice to be its first head (Imam).

Now we must fast-forward again, this time to WW2. By 1940 the Germans were masters of Paris and the Vichy French government was beginning to collaborate with their antisemitic campaigns. These went against Benghabit’s personal feelings and also against the Koran, which accords protected status to the Jews. He took the dangerous steps of helping French Jews in two ways. One was to use his religious authority to issue them with false papers certifying that they were Muslims. The other was to hide Jews, along with some Allied and Resistance escapees, in the Great Mosque itself. The story goes that he would hide them in a section of the mosque that he declared was reserved for women, and then he would prohibit any visiting Germans, being all men, from entering it.

It will never be known for sure how many he saved, because most of them had false papers. Estimates vary between 500 and 1,500. Anyway a lot.

For his contributions, Benghabrit was awarded the Grand Cross of the Legion of Honour. He is buried in a reserved area to the North of the Mosque. The Bâtisseurs de Paix, an association of Jewish and Muslim women working for inter-community harmony, submitted a petition in 2005 to the Council of Vad Yashem [The World Holocaust Remembrance Center] to recognise that the Mosque of Paris saved many Jews between 1942 and 1944, and that Vad Yashem should thus recognise Si Kaddour Benghabrit as one of the Righteous Among the Nations. Alas, this request remains unfulfilled, as no survivors have been found because of the false passports.

In the perspective of the history of interpreting, Benghabrit was a distinguished member of the lineage of French interpreter-diplomats that started under Colbert in the 17th century.

Algeciras Conference. Wikipedia,2023. There is a photo of the conference in session in the earlier post on this blog.

Posted by translatology at 9:42 AM