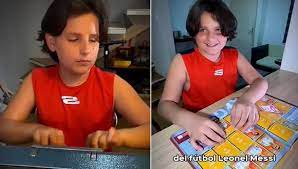 A blind 12-year-old Venezuelan soccer fan has found a way to participate in the craze of collecting World Cup soccer stickers, by adding Braille to them.

Sebastian Filoramo, from the western city of Barquisimeto, began the initiative with the support of his parents and school teacher a few months ago by buying and labeling the album stickers with a Braille machine.

"My dad is a genius, he thinks of everything," Filoramo, who lost his sight as a baby, said. "He told me: 'Do you want to fill the album? Then let's get it adapted.”

Of course this boy made news because what he’s doing is very topical. But in fact twelve is not exceptionally young for knowing and using braille. There’s a video on YouTube of children much younger being taught it (see Sources below).

Braille isn’t natural. Modern braille was invented in the early nineteenth century by the blind French teenager whose name it perpetuates. Strictly speaking, coding a text into braille isn't translating because braille isn’t a language. It’s a code. It encodes text that is already written in a language. However, braille coders themselves often call it translation; and anyway it’s covered at the level of conversion, so we needn’t be too fussy. (For more about conversion, enter conversion in the Search box on the right.)

Many people who know something about braille are unaware that it exists at three levels. Level 1 is the elementary level, where each braille cell (configuration of six dots) corresponds to a written letter. Young children begin there. It makes for slow reading, so at level 2 a braille cell may made to correspond to a whole word or even a whole phrase, a good example of language economy. This is the level of most older users. There is also level 3, which is personalised. Children’s progression through the levels deserves further study.

Braille is tactile. Hence it leads us into the realm of tactile interpreting, which really is translating and with all the spontaneity of voice interpreting. Although the number of people who use it is relatively small, there’s material about it on the internet and even many YouTube videos. Its most famous user was Helen Keller, who was deaf and blind.

Unlike braille, which is internationally standardised and has been adapted to many languages, the methods of tactile interpreting are more local and language dependent. They deserve more research.

Both braille and tactile interpreting are becoming computerised (see the Christian Science Monitor reference below) , but it doesn’t look as if the manual versions will go out of use any time soon.

Posted by translatology at 3:07 AM