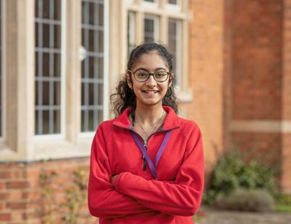 The translating done by schoolchildren that is described in the academic literature is mostly of the school language brokering kind. It’s a practical, everyday activity,  part linguistic part cultural,  between students, staff and parents. There have been several examples of it on this blog, notably the Young Interpreter Scheme in British schools. (To find the posts, enter Hampshire in the Search box on the right.) But children are capable of translating at a much more advanced intellectual level if they are given the right motivation and encouragement – as indeed they should be.

One school that recognises and stimulates this potential is Christ’s Hospital at Horsham in the south of England.  As its name suggests, it’s a very old school; it was founded in London in 1552 when hospital meant “a charitable institution for the needy, aged, infirm, or young.” Its curriculum, like its uniform, has remained traditional; however, its independence has enabled it to be adventurous. Subjects that are available include History, Geography, French, German, Spanish, Mandarin, Latin and Greek. But besides the languages that it teaches, the advent of pupils from immigrant families has led to the presence of less common native languages among the pupils. Teacher Stephen Walsh was so inspired by the educational benefits enjoyed by pupils that he has developed a school-wide poetry in translation project

And so a pupil at Christ’s Hospital fought off stiff competition to win The Stephen Spender Prize 2020 for poetry in translation in the 14-and-under category. Hannah Jordan, won first prize out of over a thousand entries with her translation of a Tamil poem and received her prize at a virtual ceremony on 18th November. Hannah continues a great tradition of poetry translation at Christ’s Hospital; many of the school’s students have had success in the competition in recent years, translating from a host of different languages, including Japanese, Swedish, Russian, Swahili and Modern Greek.

Hannah described in the commentary that accompanied her entry how she liked the poem because it was so true to her experience of life in India. “When we visit my family are constantly fixing things for my grandparents. As soon as we arrive, my dad puts together a long list of all the things that need fixing; inevitably, when we return, there is another list, yet we all get by just fine, even if the monsoon winds blow through the gaps in the wall.”

Hannah found the poem on a website, then worked with her mother on any tricky Tamil words then, in classic fashion, developed her literal version (what translators call a trot) into something more poetic, including for example the clever device of the repetition of And yet in each stanza. “One difficulty was making sure that the poem sounded funny in English yet kept the specific Tamil problems in the translation,” says Hannah.

Here is her translation:-

AND YET— OUR TAMIL LIFE

Does it matter they don’t ring?

None of my visitors

Have left without today’s gossip.

The bathroom latch is broken, so what?

A year and a half has gone by.

The chair may have a broken leg,

Its balance a little rocked.

To the startled guest,

Not a hint of disrespect.

For more than a week now,

My car-brakes have been failing.

God keeps watch on this city.

In one full piece.

I suffer a pain in my belly,

But what can I do?

If I recline at a certain angle,

I can just about bear the pain.

Predicaments may be endless

In most parts of our life,

A thread without knots

As always with a literary translation, it can be judged either for its accuracy in rendering the original or as a  production in the target language. In this case we have an unusual chance to make a comparison because Prabha Sridavan, a Tamil contributor to this blog, has kindly tracked down for us an earlier translation of the same poem done in India by acknowledged experts (see Sources). We also get a rare chance to compare a translation done by adults with one done by an adolescent.

Here is the earlier translation:-

but no one goes away.

with no latch on the bathroom door

The broken leg of this chair

will not insult a guest

only slightly imbalance him.

I have been travelling

in this god-protected city

in a vehicle without brakes

That pain at the base of the stomach,

somewhere to the left,

if I sleep at a particular angle for a while

There is a lot

to be set right

The following link takes you to the Stephen Spender Prize Celebration online event where Hannah reads her poem at 16:37: https://youtu.be/kaq7ESAa16s or click [HERE]. The video is well worth listening to. The comments by the children are remarkably adult.

Posted by translatology at 3:38 AM