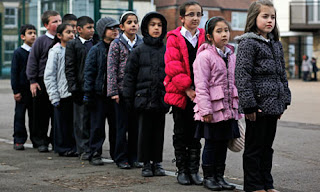 This is the first of two or more posts about adolescent interpreters in schools in England. In order to appreciate who they are and what they're doing, we have to know something about the language situation in the schools as it is these days.

In my twelve years in primary and secondary schools in London many decades ago (yes, I'm old) I only got to know three early bilinguals. Two of them were from Gibraltar, fluently bilingual in English and Spanish; they'd been evacuated temporarily to England along with all the rest of the civilian population of Gibraltar. (For more about this, enter gibraltar in the Search box on the right.) The third was a son of a Greek Cypriot family that had emigrated. That proportion was normal. It wouldn't be today. Immigration has made of the UK a country of bilinguals. Don't be misled by the many adamant monolinguals who don't want to learn another language or think they can't. Nor by the fallen enrolments for university language degrees; bilinguals don't necessarily go for a degree in their non-English language. Indeed many of the UK bilinguals know languages for which degrees aren't offered. Just look in the schools.

To drive the point home, here's an extreme but revealing case.


"The school where they speak 20 languages... Gladstone Primary
"Not one pupil at the Peterborough school speaks English as a first language. But, despite the challenges, it has just received a glowing Ofsted report."

(Peterborough is a cathedral town well away (120 km) from the London melting pot. Ofsted is the official body for inspecting schools. The school has 450 pupils.)


"The colourful displays, the smell of crayons, and the hush of mid-morning lessons feels the same as any primary school in Britain, and the children huddled around tables ... speak perfect English and there are a number of white faces because of the recent arrival of Latvian, Lithuanian and Polish children from families drawn to agricultural jobs in the area.... The town... became a major centre for Italian immigrants in the 1950s, who laboured in the brickworks and later, Pakistani and Bangladeshi workers. There are more than 100 languages spoken and more than a third of children in Peterborough speak English as their second language, up from one in five in 2008.
"Across Britain, schools are becoming more multicultural. Just over one million primary and secondary pupils spoke a first language other than English in 2012 compared with around 800,000 in 2007. On average, one in six (17.5%) primary school pupils in 2012 spoke another language at home, up from 16.8% in 2011. The challenges facing Gladstone primary, though, seem particularly acute. About 80% of its pupils are from a Pakistani background: most speak Punjabi but the school's 20 other languages include Dari, Pashto, Gujarati, Kurdish, Arabic, Lithuanian, Latvian, Russian, Polish, Slovakian, Czech, German and French. One child is from the Seychelles; another from Guinea Bissau. At break, six Year 5 girls all cheerily admit they couldn't speak English when they arrived at school..
"Where does a school begin when faced with so many foreign languages? 'Bilingualism isn't a learning difficulty. A positive view of the bilingual child is the key,' says Parker [headteacher Christine Parker] firmly. She was born in Orpington, Kent and, her view of teaching was transformed in 1986 when she began teaching at a school in Sheffield where a third of pupils were of Pakistani descent. Inspired, she worked in Pakistan in the late 80s, picked up Urdu, and has taught in diverse schools ever since.
"Those who fear that parts of Britain are becoming ghettos wonder whether the children of non-British parents are sufficiently encouraged to learn English. When I ask if Parker has ever encountered a child who doesn't want to learn the language, Parker looks at me as if I am talking gobbledegook. 'No,' she says, amazed that anyone would consider this to be a possibility. And does Gladstone ever forbid foreign languages be spoken at school? 'Why would you do that?' she asks, mystified.
"The school is helped by additional local-authority funding for newly arrived pupils in their first three years at school. [This] has funded innovations such as a new 'family support worker' who liaises with parents (who may struggle with English). Other unique features include a buddy system, so new arrivals are paired up with schoolmates who speak their 'specialist' language, and Gladstone's determination to forge links with other schools.
"What's the best thing about the school? 'We're famous!' cries Sarah, eight. 'We've been on TV. We've been on the newspapers. We've been everywhere.'"

References
Image
Children from Afghanistan, Pakistan, Portugal, Lithuania and Slovakia in the playground at Gladstone Primary. Photograph: David Sillitoe for The Guardian.

Posted by translatology at 7:33 AM