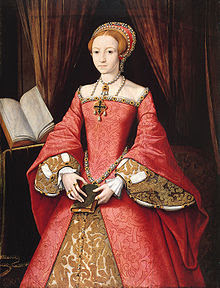 On this day in the year 1544 – in the words of Anne Lake Prescott, a distinguished American scholar of the English Renaissance –

This was a red-letter day in the annals of child translators. Lady Elizabeth was the future Queen Elizabeth I of England. Catherine was Catherine (or Katherine) Parr,

"the sixth and last wife of King Henry VIII, destined to outlive the mercurial ruler... She was an admirable wife to Henry and a loving stepmother to his two youngest children, Elizabeth and Edward. She was also the most intellectual of Henry's wives, caught up in the turbulent religious climate of the times."

"queen consort of Henry II of Navarre. Her brother became king of France as Francis I, and the two siblings were responsible for the celebrated intellectual and cultural court and salons of their day in France... As an author and a patron of humanists and reformers, she was an outstanding figure of the French Renaissance."

As for her poem Le Miroir de l'âme pécheresse (The Mirror of the Sinful Soul), it is

"an outpouring of surprising intensity: over 1,400 lines of self-accusation and self-abasement. The Reformist orientation is apparent in the poem's Pauline-Augustinian bent, as in the prominence of biblical allusions. The speaker of the poetic monologue presents herself as a wretched sinner, who has so violated and betrayed her relationship with God that she is totally unworthy of his grace. Parsing out that relationship into a series of familial paradigms - daughter, mother, sister, wife - she explores each area of defection through an exemplary episode from the Bible."

So the translator may have been a child, but the text was no children's poem.


"Scholars sometimes assume that Elizabeth chose to translate this poem. In fact... someone older, possibly Catherine herself, would very likely have known of the book and pressed it on her.... Elizabeth could hope that by obediently translating the Miroir she could please an influential and affectionate stepmother....
“Neither do we know who, if anyone, helped Elizabeth with her translation. It seems unlikely she was utterly on her own, yet her errors and omissions suggest inattention (or inadequate French) on someone's part. She opens with a letter to Catherine. She knows of the queen's 'affectuous wille, and fervent zeale... towardes all godly learning.' So, to avoid idleness, she has turned 'frenche ryme in to englishe prose, joyning the sentences together as well as the capacitie of my symple witte, and small lerning coulde extende themselves.' Her effort is merely a beginning, so she hopes Catherine will not show it ot anyone ‘lesse my fauttes be knowen of many.’ Maybe Catherine can amend it. Happy New Year."

Who might have helped Elizabeth? Let’s not underestimate her. She'd been put through a thorough Renaissance Christian education that included learning, Italian, Spanish, Greek and Latin besides English rhetoric and French. So she no doubt had capable teachers. We know, for instance, that her tutor in Greek was Henry Savile, later one of the King James Bible team of translators. By the time she was eleven, we can suppose, on the basis of this education and the translation itself, that she was an Advanced Native Translator.

In spite of Elizabeth’s reticence about the quality of her translation, once she became queen it was obviously in some courtier’s or bookseller’s interest to publish it and that’s what happened. See References below.

There are some other noteworthy things about this translation:
* Author, translator and intended reader were all women, unusual for its time but indicative of a breakthrough by women into the literature of the Renaissance
* The important role of religious translation, about which I've often commented elsewhere
* The constant flow of ideas and literature between France and England, aided by translations
* It's a translation from rhymed poetry into target-language prose, a not uncommon technique used even by Expert Translators
* Elizabeth's self-criticism, her meta-translational awareness(pardon the term)
* The proof that sophisticated translations by children at the Advanced Native Translator level are by no means a modern phenomenon. This example pushes it back by nearly five centuries. Elizabeth was very intelligent but she was surely not unique. How many other literary and religious translations by children have been done over the centuries, and then lost because the child was not famous or royal?

The Miroir or Glasse of the Synneful Soul. Elizabeth's manuscript in her own handwriting. The dedication reads:

"From Assherige, the last daye of the yeare of our Lord God 1544 ... To our most noble and vertuous Quene Katherin, Elizabeth her humble daughter wisheth perpetuall felicitie and everlasting joye."

Elizabeth probably also embroidered the binding. The book is now in the Bodleian Library at Oxford. The binding is illustrated in Wikipedia, http://en.wikipedia.org/wiki/The_Miroir_or_Glasse_of_the_Synneful_Soul

A Godly Meditation of the inwarde loue of the Soule.Compiled in French by Margaret Queene of Nauerre translated by Princesse Elizabeth, Queene of Englande. London, circa 1570. There are three versions of this publication in the British Library in London.

Image
Elizabeth at age 13. Painter unknown. Source: Wikipedia.
Posted by translatology at 4:49 AM