From France to England via Imperial Russia II 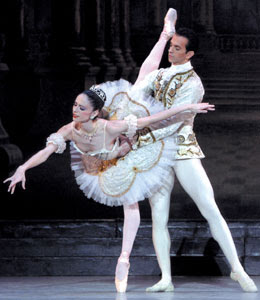 The previous post told how Charles Perrault's 17th-century French fairy story The Sleeping Beauty (Beauty for short) travelled eastwards across Europe to Russia and was transformed into a sumptuous ballet coordinated by the St Petersburg impresario Ivan Vsevolozhsky. That was in 1890. Here begins the story of its journey back to the West under the directorship of an even greater Russian impresario, Sergei Diaghilev.

In 1909 Diaghilev formed his own ballet company, Les Ballets Russes, and took it to Paris, where it was a sensational artistic success. Notice that, true to the bilingualism of the Russian elite, he gave it a French name, which it retained wherever it went; and he was better known in the West himself by the French form of his name, Serge.

This was a very different generation from Vsevolozhky's, one of new Russian vitality in the arts, and it explains the bombshell that exploded in Paris. Russia, the imbiber of Western culture, leapt to its fore. Not only did the Ballets Russes include young dancers who were to become legends: Nijinsky, Pavlova, Karsavina and others who set a new standard and repaid Russia's debt to Petipa. Diaghilev also brought as his artistic director Léon Bakst.

"Together they developed a more complicated form of ballet with show-elements intended to appeal to the general public, rather than solely the aristocracy. The exotic appeal of the Ballets Russes had an effect on Fauvist painters and the nascent Art Deco style."

In the same spirit, Diaghilev commissioned the music for three ballets from the avant-garde composer Igor Stravinsky. The most influential of these was The Rite of Spring (1913).

"The Rite, whose premiere provoked a riot, transformed the way in which subsequent composers thought about rhythmic structure, and was largely responsible for Stravinsky's enduring reputation as a musical revolutionary, pushing the boundaries of musical design."

Yet through all those tumultuous times, Diaghilev didn't forget Beauty. After the Russian Revolution of 1917, he stayed in the West with all his troupe. In 1921, as an accommodation to British theatrical taste, he brought Beauty to London.

"It was a production of remarkable magnificence both in settings and costumes but, despite being well received by the public, it was a financial disaster for Diaghilev and Oswald Stoll, the [English] theatre-owner who had backed it."

There's a curious anecdote about the name under which the production appeared.

"Diaghilev insisted on calling the ballet The Sleeping Princess. When asked why, he quipped, 'Because I have no beauties!'"

But although Sleeping Princess might be justified as as an extralinguistic translation, since the star role is indeed that of a princess, it was a mistake because it failed to connect with the entrenched English tradition of the Perrault tales that I described last year.

As it turned out, the impact of Les Ballets Russes in Britain went far beyond that one production. It sparked a new taste for ballet in British culture and a new school of British dancers – another remarkable cultural transplant. In 1926, Marie Rambert, who had danced for Diaghilev, created the first ballet company in Britain, which became known as Ballet Rambert. She recruited a generation of outstanding British dancers and choreographers. Another 'spin-off' from Les Ballets Russes was Ninette de Valois. Despite her French-sounding professional name, she was actually Irish, christened Edris Stannus, and she made her professional debut as a principal dancer in pantomime! That was before Diaghilev spotted her.

"Later in her life, de Valois claimed that everything she knew about how to run a ballet company, she learned from working with Diaghilev."

The school and company she founded in 1931 became known as The Sadler's Wells Ballet (from the name of the theatre where it was housed). It was the first ballet company I ever saw, towards the end of WW2 when it appeared in other London theatres besides Sadler's Wells.

During WW2, the Royal Opera House in London, popularly known as Covent Garden from the district where it's located, had been turned into a dance hall for troops on leave. In 1946 it was cleaned up and reopened, and the opening night featured the Sadler's Wells production of Beauty. The company, which was by then nec plus ultra, became The Royal Ballet and its teaching branch The Royal Ballet School. In 1949 it made a triumphant tour of the United States with Margot Fonteyn as Princess Aurora in Beauty. And so it has continued, with Beauty in its repertoire.

The most recent developments have been due, as in so many fields, to the new technologies. There's a Royal Ballet production of Beauty available on DVD, and now the RB has turned to transmitting some of its productions live to cinemas across Europe and beyond. And that’s how I came to see it with friends last week on the big screen of a cinema here in Valencia. A magnificent production, dressed in the Oliver Messel costumes from the 1946 production. The prima ballerina looked very British, the leading male dancer was Russian as was the conductor of the British orchestra. Cultural fusion. The programme notes duly named Tchaikovsky, Petipa and Perrault.

Term
Extralinguistic translation: a translation that results from other factors besides language ones.

Image
From The Royal Ballet's The Sleeping Beauty, 2009. Source: www.check-in-london.com.
Posted by translatology at 12:10 AM