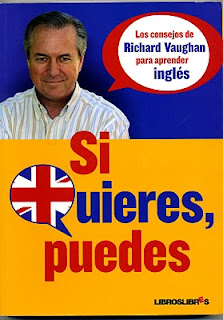 Richard Vaughan, whose surname Spaniards commonly mispronounce as Voh-ggen, is the most popular English teacher in Spain. An expatriate American in Madrid who found a niche teaching English to corporate employees, he has come a long way and now has his own dedicated all-day television channel, Aprende Inglés TV. That’s all it does: teach English to Spaniards, and there’s a big demand for it. Undoubtedly a large factor in his success is his easy-going personality and mellifluous voice, which charms both his screen students and the viewers. English without tears in a one-on-one conversational setting. His method is to introduce new knowledge – mostly vocabulary and phrases – into the conversation naturally and with just a minimum of explanation. He has competent assistants, but none of them can match him.

Vaughan is a man after my own heart and way of thinking, because he believes in the use of translation in foreign language teaching. Besides his TV programmes, he’s published a book with a typically upbeat title: Si quieres, puedes (You Can If You Want To). It has something very unusual for a book about language teaching: not one but two chapters on the use and usefulness of translating.

Mind you, he makes a clear distinction between child and adult learning, and his students are all adults. He adopts the common hypothesis of a loss of mental ‘plasticity’ around the age of 12. Before then, language learning is instinctive and effortless; afterwards, it requires effort and you have to work at it. He emphasises hard work. He illustrates by the case of his own children, who became early bilinguals in English and Spanish without having to be taught, but who had as much difficulty as anybody else learning other languages later on.

The chapter on La traducción inversa (translation into one's second language) opens with his experience teaching a small class of recalcitrant Spanish engineers. He couldn't get them to do homework until he gave them a short list of useful Spanish sentences to translate into English. Then they all did it.

I discovered, thanks to my five engineers, men as rough-hewn as a limestone quarry, that the challenge of translating into one's second language is a powerful stimulus for inducing Spaniards to work at their English.

And he went on to compile and publish with great success three Translation Booklets, each containing 1,500 phrases.

He's very critical of the modern dogma that use of the first language should be banned from second language teaching. Indeed he positively rails at those he calls "the modern gurus of teaching."

Adults cannot accept a second language without some support from their first language... By puberty, human beings already have their brains, mouths and motor processes formed around their mother tongue.

In the short chapter on traducción directa (first-language translation) he recommends translating very literally from English into Spanish so as to point up the differences between the two languages and be more aware of the specificities of the English.

My own belief in the value of translation when learning a language comes not so much from teaching as from my own experience. I've always used translating and learning the translations by heart as one method among others for extending my knowledge and mastery of the other language. For Spanish, my favourite source book is one called Street Spanish, because it contains such a wealth of colloquial expressions. These are encapsulated in dialogues with the Spanish and the English on facing pages. I read the Spanish utterances and the corresponding English ones over and over until I can translate by heart from the English into Spanish. In other words, the English becomes a cue for my Spanish production. Then I seize opportunities to use the Spanish expressions in conversation. This is a vital step; it's by use that what start as a translation becomes incorporated into my direct Spanish production.

However, I've never gone so far as a Hungarian polyglot I once knew. He'd been brought up in a pious home where there were Bible readings every evening, so that he came to know long passages of the Bible by heart. To learn a new language, he would turn to the Bible in that language, read the passages corresponding to those he knew and mentally translate them into Hungarian as he went along.

David Burke. Street Spanish: the Best of Spanish Slang. New York: Wiley, 1997. $12 from Amazon USA. Good, but use with care. It's an American production and many of the expressions aren't current in Spain.
Posted by translatology at 11:19 AM