Church Interpreting, a Gift of the Spirit

I’ve written several times about church interpreters (July 29; August 3, 11 and 27; October 28), and I know from the comments and the emails I’ve received that several of you have a keen personal interest in it.

Now comes a splendid report that describes what must surely be the ultimate in church interpreting organization, or indeed in any kind of interpreting organization. It’s about the interpreters for the annual general conferences of the Mormon church (The Church of the Latter-day Saints), known for short as Conference. Most of the work is done in simultaneous at the LDS Conference Center in Salt Lake City, but some is done at remote sites through a tie line telephone network and some even more remotely.

”Conference is interpreted live in up to 92 languages — 52 in the conference center, 28 via the remote Tieline system and another dozen on-site in countries across the world… In all it takes 800 people, including hundreds of interpreters and dozens of support staff, for Conference.”

The scale of all this reveals two things about the Mormon church. The first, and more obvious, is how widespread it has grown to be in the world: from Utah to Tonga, and not forgetting Valencia. The second is something that derives from the Mormons’ fulfilment of the New Testament exhortation, "Go ye therefore, and teach all nations..." At any one time, they have 50,000 full-time missionaries worldwide, most of them single young men and women in their late teens and early twenties, and they’re assigned to places that are usually far from home. What’s more, they’re enjoined to learn the languages of the places they’re assigned to, and in the two years duration of their missions they have the time to do so. As a result, the leading Mormon campus, Brigham Young University at Provo, Utah, is an extraordinary reservoir of fluent bilinguals, many of them speaking languages that are little known or studied elsewhere. (And I think it’s no accident that Brigham Young also has one of the pioneers of computer-assisted translation, Alan Melby,)

Formal training for the Conference interpreters is minimal:

“For each language, a language team coordinator handles finding and recruiting interpreters for those languages… Through pre-screening their language ability and their standing in the church, they are then brought in for a three-hour orientation.”

However, many of the interpreters have been at it for a long time.

”Diana R. Tucker… has been interpreting in Spanish for conference for more than 40 years.”

That too is a record that’s hard to beat. Whatever they were when they started out, it’s certain that such people have risen by experience to the level of Expert Translators within their specialized domain. Some of their remarks show that experience:

"One has to practice their trade all the time," says a Tongan interpreter. "Everyone has their own way of preparing for Conference… It isn't that we just show up Saturday morning and sit down and things flow… but there is always some nervous energy [needed],” He was just as nervous this weekend as he was interpreting for the first Conference. "I pray that I will be equal to the task to provide the right amount of expertise in the delivery of the talk.”

There are many interesting technical and historical details in the article I‘m drawing from. I’ve observed before that church interpreters are not inhibited by the convention of neutrality and detachedness that conference and court interpreters are supposed to maintain. At LDS,

”Some sit to interpret. Others stand using music stands to replicate being at a podium. Some are still and others are animated as they interpret… They also try to match the emotion and tone of the speaker as appropriate for the talk and the language… Our intent it is to try to within the culture, to mirror the speaker and his style."

I’m not religious. But I recognize that religious people often speak a different ‘sublanguage’ from me, and that I have to adapt my thinking to it if I want to understand them. As you know, I believe there’s a fundamental competence in or underlying translating and interpreting which isn’t acquired by teaching; it comes with us and is awakened by or is applied to bilingualism. I used to say to my interpretation students, “I’m not your teacher, I’m your coach.” (Some of them liked that approach, some didn’t.) The translation division director at the LDS Conference Center is Jeff Bateson. He says,

“Translation is a gift of the Spirit, and people who come here need to have access to that gift. We try to do everything we can to help them prepare for that."

I like to think we’re saying much the same thing in our different ways. 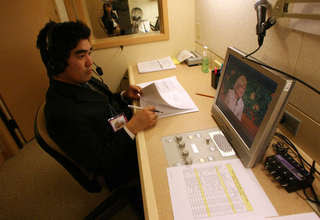 Yuta Uemura interprets a church elder’s speech into Japanese during a meeting at the Church of the Latter-day Saints Conference Center in Salt Lake City.
Notice the screen for providing a close-up view of the speaker at a distance. Years ago, a colleague of mine used to bring a pair of binoculars into the booth for that purpose.

Photo by Kristin Murphy, Deseret News.
Posted by translatology at 3:45 AM