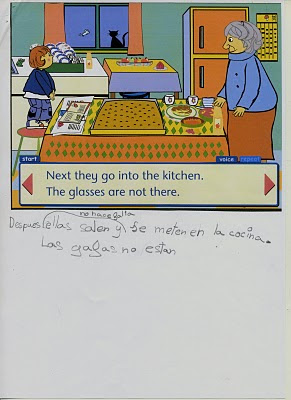 I’ve written about child translators, now here’s a concrete example. It’s an English to Spanish translation by a child Native Translator. The above is one page from a nine-page book of it.

The translator – let’s call her Maria or M – was nine years old. (She’s now ten.) She lives with her family near Valencia and goes to the village school. Her first language is Spanish. Like all Valencian children, she’d had English classes at school from first grade onwards. In addition, she was taking a weekly private English lesson for reinforcement and for conversation practice. She’s bright and eager to learn. The piece of translation shown here is both an accurate translation of the English and correct Spanish. That’s good, but the English is very simple, so it’s not surprising for a child of her age and schooling. Furthermore she had the help of the picture for her COMAL. But it’s not a word-for-word translation; the Spanish is idiomatic: se meten en for go into and no estan for are not there.

There are several things about this translator that are particularly interesting.

1. M’s critical remark written above her first clause: no hace falta (it’s not necessary). She wrote this because the information in the clause isn’t expressed in the English, though it’s implied in the development of the story. So she added something to the source text, apparently thought better of it when comparing it with the English, and corrected. This is an indication of her metatranslational awareness.

There are several other places in the book where she corrected herself.

2. M wasn’t asked to do the translation. She proudly produced it to her teacher. So there was no elicitation and no communicative need for it. Perhaps she had an ulterior motive in a desire to please her teacher, or she may have done it to prove she could, or she may just have done it for amusement (ludic translation). Anyway, it would be quite wrong to think that all child translation is of the Language Brokering kind.

3. M was a Native and not a Natural Translator (see last year’s July 13 post for the difference or use the Search box to ask for Essential Definitions). I say this for three reasons:

a) M lives in a bilingual community where translating is going on all around between Spanish and Valencian. It’s virtually impossible to grow up here without being aware from an early age that people speak two languages and without hearing and seeing translations.

b) The method and the books used for teaching English in M’s school and in her private lessons avoid translation. Nevertheless, the reality is that teachers often have recourse to it for explanations and equivalences.

c) M used a dictionary when she had a vocabulary problem. We know it because she said so. She had a bilingual dictionary and she knew how to use it. Translating may come naturally, but knowing how to use a dictionary does not. (I’ll have more to say about this in a later post.) So using a dictionary is a sure sign that somebody is a Native and no longer a Natural translator, even if they’re still at an early stage.

Posted by translatology at 4:27 AM