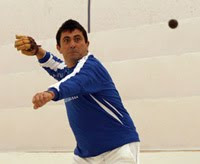 One of the things I did during the Christmas break was go and watch a pilota match.

Pilota is a traditional Valencian handball game with a documented history going back to medieval times. The players are called pilotaris. It’s basically similar to the more famous Basque pelota game and requires similar skills - Valencians and Basques occasionally play against one another - but there are also many differences. Some versions are played on an indoor court, some in the street: the championship indoor court in the city of Valencia, where I saw the Chrismas match, dates back to 1868. It’s a fast game when it’s not being interrupted for betting. But as much as for the game, I like it for the atmosphere. Today the top players are professionals, but there’s none of the crushing commercialism of professional football. Players and spectators mix with and greet one another in the bar before the game, and there’s a strong smell of cigars. Only men play and the spectators are 95% men.

Similar handball games are played in other countries - France, Belgium, Italy, some parts of Latin America - and in recent years they’ve joined with the Valencians and the Basques in an international federation. Now the Valencians have discovered there are long-established versions in Britain, including Ireland. The best known of them is called fives (from the five fingers of the player‘s hand). But unlike pilota, fives isn’t a popular sport. On the contrary, it’s elitist, being played only in some of the ‘public’ schools (see my post of December 2) and by the alumni of those schools at a few universities.

So some English officials have visited Valencia and seen the game here in preparation for taking part in the European championships next September, and they were duly entertained. However, there was a language problem. The Valencian players are bilingual in Valencian and Spanish but they don’t speak English. The English don’t speak Spanish.

So into the gap leaped Fran Zanón, a pilotari who happens also to be a university student of English Language and Literature, to explain the Valencian game to the visitors. A Native Translator with the right extralinguistic background. The English were impressed. “He must be a great pilota player,” remarked one of them.

There are articles on Valencian Pilota and on Fives in Wikipedia.

Photo: http://www.pilotavalenciana.com
Posted by translatology at 4:07 AM