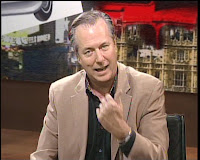 There’s an English resident here in Valencia who gives private English conversation lessons to local children and adolescents. In theory the children already know some English, because it’s a compulsory subject in the schools. In fact they do know the basic grammar and an assortment of vocabulary, and they get through their exams by answering multiple-choice questions about them. But they can’t speak English conversationally. If you ask them a simple question like, “How are you today?” they’re nonplussed and don’t know how to reply. So some parents, who want their children to be able to function in English, are prepared to pay for conversation lessons - and sometimes older, quite advanced students are too.

Motivation and encouragement are also important factors. My informant’s role model is Richard Vaughan, an American living in Spain (see photo), whose English conversation programmes are very popular on TV. And rightly so, for his easy-going personality is very encouraging and amusing, truly ‘English without tears’, and he’s had a lot of experience. I’ll say more about him soon.

As my informant’s classes are small, only one to three students, she has far more opportunity than teachers in the schools to observe and adapt to individual variations. One of her current students has a special difficulty. He’s a 14-year-old boy, first language Spanish, and he’s done about five years of English at school. The problem is that he can’t or won’t respond to anything he’s told in English without first translating it into Spanish. Any question that he’s asked, he will first translate out it loud before replying to it, although he’s been told time and time again not to do so and he's not otherwise a difficult student. I call it compulsive translation.

His behaviour can’t be attributed to the teaching method in school, which in principle doesn’t use translation. It’s true that the teachers, who have to cope with classes of 30 or more, often despair of explaining everything in English and revert to translation; but they do so as little as possible, and there are no translation exercises, and and there's no translation in the examinations. So most of the students are close to being Natural Translators of English.

Perhaps the behaviour isn't so strange if we consider what a well-known teacher of translation and of French in Canada, Jean Darbelnet, once said. He told us that it was illusory to think one could teach a second language and ignore translation, because the students were constantly translating to themselves anyway. However, the peculiarity in the present instance is that the student insists on completing the translation process (utterance to utterance) by speaking the translation out loud.

If anyone knows a good cure for this behaviour, my informant would be glad to hear about it.

Posted by translatology at 5:44 AM