The Fate of the Afghan Fixers 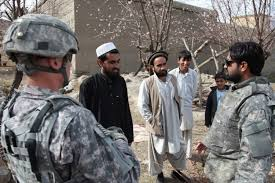 Recent events have disrupted the schedule for this blog. It’s difficult to concentrate on writing with so many disasters unfolding. A couple of posts ago we expressed the fear that efforts to rescue the Afghan interpreters who were embedded with the allied forces would prove to be too little and too late – a prediction that was tragically true for many of them. Here’s one example.

Hero Afghan Interpreter Mohammed Nabi Wardak, 30, is sleeping on the streets of Athens and fled his country of Afghanistan since he helped British armed forces in the fight against the Taliban. This simply cannot be right and it’s our duty to help him.

Mohammed served on the front line in Helmand Province between 2008 and 2011. His commanding officers during this time described him as an “excellent interpreter” who risked his life on many occasions. Earlier this year a review in policy meant that over Afghan interpreters had been given the right to stay in the UK to protect from the threat of extremists and as a way to recognise the work they have done for us. Mohammed deserves that too. Mohammed was threatened during his service with our armed forces and continued to receive threats by the Taliban which have been directed to his family and to him. He was forced to leave the army because of it and leave a second time to look after his sick mother. He has had to leave his wife and family in Afghanistan.

The general public has a poor understanding of the role of the military interpreters (often called translators) in Afghanistan. There was much more to it than translating between English and Pashto or Dari, the two main Afghan languages. They were fixers. Fixers is a term that goes back a long way in a pejorative general sense, in fact to 1601 according to Merriam-Webster. Hence: “The one-time fixer for Trump, Cohen…” More recently, however, it has become associated with journalists sent on assignment to countries with which they are only superficially acquainted and whose languages they do not speak. In that role they are invaluable assistants, factotums. They are not only the mouthpiece for their clients, they are also their ears and must report what the other side are saying. They aren’t neutral; their loyalty is to their clients, some of whose lives they saved. And from there it is easy to understand how they became invaluable assistants to the American and allied military. This explains the close relationships that were often formed between the fixers and the soldiers to whom they were assigned and the remorse that the latter feel at leaving their fixers to their fate. If today I were to update my All of Interpreting paper, I would certainly have to add fixer. The closest terms to it are liaison interpreter and escort interpreter.

Not all the interpreters were so unlucky. Some did manage to get away in the nick of time. A recent issue of El Confidencial tells the story of Salem Wahdat, who worked for several years for the Spanish troops in Afghanistan and for the Spanish embassy in Kabul. In the latter role he even interpreted for the King of Spain. He was one of the tiny handful of Afghans who had studied Spanish at university. One Saturday morning, in spite of the turmoil in Kabul, he decided to go to the office. When he got there he found that not only had his boss failed to turn up but all the government offices were empty. He took this as a sign that the moment had come for him to disappear too. His mother and his brothers urged him to get away without them because he would certainly be a target for the Taliban. He took the first commercial flight he could find and managed to get on it thanks to his diplomatic passport. He ended up in Turkey with what little money he had managed to withdraw from a bank. His children got out later.

May Bulman. Afghan man who ‘risked his life’ for British army sleeping on streets of Athens after being rejected by UK. Independent, 17 August 2021.

Brian Harris.  All of Interpreting, A Taxonomic Survey. Academia.edu, https://www.academia.edu/12072834/All_of_interpreting-a-taxonomic_survey. 1980.

Posted by translatology at 12:48 AM