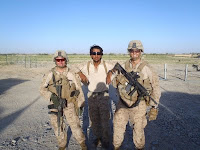 The news is that both the USA and the UK are going to take in a substantial number of the Afghan interpreters who worked for their missions in Afghanistan. Let’s hope it’s not too little, too late.

Zia Ghafoori, his pregnant wife and their three small children landed in the United States from their home in Kabul in September 2014. He held five US visas - a reward for 14 years of service as an interpreter with US Special Forces in Afghanistan. But the benefits stopped there. Upon arrival, Zia found himself homeless - sent to a shelter by a well-meaning volunteer who told him it would be a place for him and his family to start a new life. Seven years later, the memory still angers him.

Afghan interpreters and fixers have been described several times on this blog. To find the posts, enter afghan in the Search box on the right. They show why it’s only right the terps should be given a decent asylum.

Afghanistan has been called the graveyard of empires. It’s been going on for nearly two centuries. A British mission was massacred in 1843 and two further British incursions from India were unsuccessful. Then in 1970 the Soviets tried to take over the country but they got so trounced that they left in despair. Finally the Americans, with typical bravado, had a go at it with a bunch of allies. Now they too are fleeing. Truly “the only thing we can learn from history is that we learn nothing from history.” If the Chinese want to have a try, let them learn the hard way.

Miranda Bryant. Afghan translators and their families to fly in to UK. The Times, 22 June 2021. https://www.thetimes.co.uk/article/afghan-translators-and-their-families-to-fly-in-to-uk-vrs23g or click [HERE]..

Image
SSgt Northrup and LT Smith with their terp. Kilo 2nd Platoon Deployment Photos, 2010.
Posted by translatology at 10:14 AM