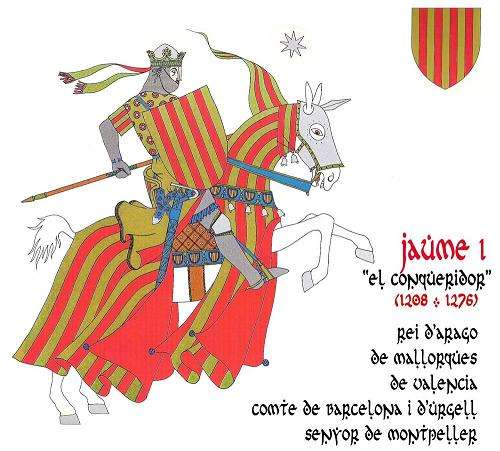 It’s a tradition on this blog to have an entry for 9 October (el Nou de Octubre), the national day of the Valencians. The event has a monument in the village where I live, the Creu de la conca (Cross of the Conquest) , a replica of the one that was erected in the 14th century to mark the marshy area where King James I of Aragon (in Valencian Jaume I) parked his army for two weeks while he negotiated the surrender of the city after a long siege.

The Moors (Arabs and North Africans) had ruled Valencia (Arabic بلنسية) Valencia from 718 to 1238. During that time it was a prosperous and expanding city in a rich agricultural setting where they introduced irrigation and rice cultivation. Eventually, however, their regime was ended by the military campaigns of the Christians from the north and the internecine warfare between the Muslim principalities.

The pause in the fighting from 28 September 1238 onwards was ostensibly to allow the negotiations but in reality also a device for both sides to play for time. James was expecting troops from Aragon to reinforces the army he had brought mainly from Tortosa; the Moors were hoping for reinforcements from Tunis. The Tunisians made the mistake of landing further north at Peñiscola (a town worth visiting if ever you are in the area). Meanwhile the negotiators had to overcome a language problem. James only spoke Aragonese, a Latin language; the Moorish ruler Abu Zayd only spoke Iberian Arabic. Interpreters were essential. Where were they to be found?

Under the Moors, Valencia had a Jewish community eminent for its size and wealth. Their community and trade connections had always kept them in contact with both the Christian and Muslim worlds. Learned members of the community were taken on as translator-secretaries and interpreters. The names of some of them have come down to us: Maestros R. David, R. Solomon, and R. Moses Bachiel; David Almadayan, secretary to the infante D. Fernando; Maestros (or Alfaquins, physicians) R. Joseph, Abraham ibn Vives (probably the father of the wealthy Joseph ibn Vives who in 1271 held a lease of the salt-works of Valencia, and who was probably the ancestor of the humanist Luis Vives (1492-1540), after whom a street and a secondary school in Valencia are named),.

When James finally made his entry into the conquered city on Oct. 9, 1238, the Jews went out to meet him with their rabbis and delegates at their head, and presented him with a scroll of the Law in token of homage. As a reward for the important services which they had rendered him in the conquest of the strongly fortified city, he presented to some of them houses belonging to the Moors, as well as real estate in the city and its precincts. Among those who received such gifts after the repartimient (redistribution of Valencia) were the secretaries and interpreters of the king:

James was an excellent administrator as well as a warrior. The Jewish community continued to prosper in their allotted quarter of the city (the aljama) with a few restrictions under James and his immediate successors, but envy and fanaticism were building up. On July 9th,  1391 a large group of youths attacked the Jewish Quarter and killed over 250 people, ransacking their homes and raping the women of each household. Though over 90 people were eventually arrested, this event essentially ended the Jewish presence in Valencia with the exception of visiting businessmen. The remnants of the aljama were obliterated.

Posted by translatology at 8:33 AM