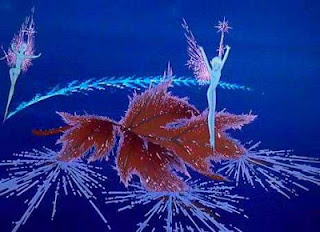 Nutcracker, for reasons mentioned in the previous post, didn't enjoy the same success as Sleeping Beauty and it therefore took longer to reach the West as a complete work. (Even the story was little known in Britain and America, though an English translation of the Dumas version had existed since the late 19th century and one by a better-known translator was published in 1919 – see References)


"Although it was not considered much of a hit in Russia The Nutcracker kept being performed throughout the theatre year (at that time it was not yet heavily associated with the Christmas season). In the West, however, it boomed... in scattered pieces, with the Arabian dance transplanted [for Diaghilev] into the Ballets Russes’s Sleeping Princess and with Anna Pavlova‘s take on The Waltz of the Snowflakes.
"The first complete Nutcracker was staged in London by the Vic-Wells Ballet in 1934, based on choreographic notation by Nicholas Sergeyev."

Sergeyev was a former dancer and stage manager at the Mariinsky who'd emigrated in 1918. The transcription of this and other ballets into systematic choreographic notations constitutes yet another example of intersemiotic translation, but we won't dwell on it here.


"Ten years later saw the first US version by San Francisco Ballet (1944) and another ten years brought George Balanchine’s blockbusting version for NYCB (1954), now staged every year by several US ballet companies. By the 1980s, 300 separate productions were touring the US."

Balanchine was another Russian émigré, who, like Sergeyev, knew Nutcracker from his younger days at the Mariinsky and stayed close to the original, although he did make changes because he was himself very creative. Indeed his greatest creation was his dance company, the New York City Ballet (NYCB), which has had a great influence on ballet in the United States. His is an example of the contribution that the flight of Russian artists after the Revolution made to the transfer and implanting of Russian culture in the West.

Meanwhile, the music that Tchaikovsky had extracted from the full ballet score to form an orchestral suite made its own successful way through the concert halls on both sides of the Atlantic. And then, in the United States, it underwent yet another surprising intersemiotic transfer.

Between 1938 and 1940, Walt Disney and his team of graphic artists made the animated film Fantasia, and it included the Nutcracker Suite. It was among the most original and pioneering films of all times for a number of innovations: the use of classical music as the basis (music film instead of film music), the recording thereof by a first-class orchestra and conductor using the best audio available at the time (it was the first American film to use stereo), its uncompromising concert length (there was a 15-minute interval when I saw it), its combination of animated and human actors, use of the most advanced animation resources in the world, and above all the free rein given to the graphic artists.


"During production, the animators were given no instructions for coloring. Walt Disney instructed them to use any colors they wanted, a first."

I was lucky enough to see Fantasia during its 1941 first release, before cuts and restorations and with the original soundtrack recorded by The Philadelphia Orchestra conducted by Leopold Stokowski. Despite his Russian-sounding professional name, Stokowski himself might be considered a cultural export to the USA, since he was born Leonard Stokes in London, England. He threw himself into the project, and the result was phenomenal. Like many masterpieces, Fantasia is uneven, but at its peaks it's brilliant. For very young children, there's no doubt that its most brilliant idea of all was the casting of Micky Mouse as The Sorcerer's Apprentice. But the film was mainly pitched at older children and at adults. And that's where the music of Nutcracker came in.

Fantasia was released four years before the American premiere of the ballet, yet in the visuals of Nutcracker there is clear ballet influence.


"Over the decades, much has been written about the relationship between Disney and dance.
Upon the 1940 premiere of Fantasia at the Broadway Theatre in New York, Dance Magazine said, 'the most extraordinary thing about Fantasia is, to a dancer or balletomane, not the miraculous musical recording, the range of color, or the fountainous integrity of the Disney collaborators, but quite simply the perfection of its dancing.'”

My own mental accompaniment to the music of Nutcracker was formed and imprinted indelibly by Fantasia long before I saw the ballet or read the story.

Image
From The Nutcracker Suite sequence in Fantasia. Source: cornel1801.

Posted by translatology at 2:44 AM