Another Historic Meeting And Its Interpreter 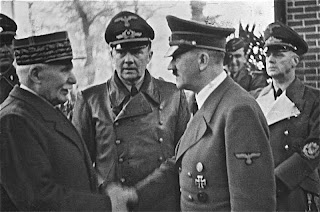 Somewhat to my dismay, the most popular post on this blog, in terms of number of page views, has been one that has little to do with the declared topics of Natural and Native Translation. I attribute the mismatch to the browsers: many people are transported to the blog by chance when using keywords that are unrelated to translation.

And so it's probably historical terms like Hitler and Franco that have brought so many readers to the post about the meeting of the two dictators, with their interpreters, at Hendaye in 1940. To find it, enter hendaye in the search box on the right. Just this week, K. Muralidharan from India added a comment,


"I'm really thrilled to read what transpired between these two dictators during those horrid times and how Franco helped his country not to plunge directly into WW2."

Well yes, that's something Franco did right, though he continued to sit on the fence between the Germans and the Allies.

Meanwhile Hendaye wasn’t the end of that eventful journey by Hitler, nor the end of what we know about the interpreting. From Hendaye, his private train went directly to a small town in France called Montoire-sur-le-Loir.


"The location of Montoire station was chosen because of its relative isolation and also its proximity to the main Paris-Hendaye train line. Besides, in case of an aerial attack, the train could have found shelter in the nearby tunnel in Saint-Rimay."

There Hitler already had an appointment to meet Marshal Philippe Pétain, who was by then the head of state of a defeated France. Pétain had decided he had no option but to collaborate. Ever since then, Montroie has been (in)famous in French history


"as the location where, on 24 October 1940, the handshake between Adolf Hitler and Maréchal Pétain took place signifying the start of organised French collaboration with the Nazi regime."

Here's an official photograph of the handshake between the two leaders. But who's that imposing man in the middle who seems to be presiding over the ceremony?

None other than Hitler's personal interpreter Dr. Paul Otto Gustav Schmidt. Schmidt was head interpreter (Chefdolmetscher Gesandter) at the German Foreign Ministry, a Professional Expert diplomatic interpreter who participated in too many important events to tell of here. He survived the war and the Nuremberg trials to tell his version of the story (see References), and even started a school for interpreters in Munich in the 1950s  (SDI München - it's still there).

He'd been sidelined at Hendaye because he didn't work in Spanish, but at Montroie he came into his own.

The meeting lasted until 26 October, 72 years ago today.

The Wikipedia article on Montoire is here.

The website of Sprachen & Dolmetscher Institut München, the school that Schmidt founded, is here.


Image
Source: Bundesarchiv
The fourth man in the picture is Joachim von Ribbentrop, Hitler's foreign minister.
Posted by translatology at 11:02 AM