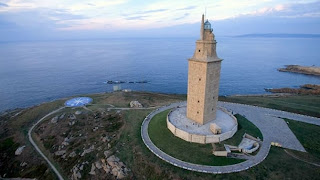 Tomorrow we become ‘climate refugees’ for a few days and take off to the north of Spain for a short respite after the August heat in Valencia. It will also be a new language experience.

We’re going, among other places, to A Coruña. No, not La Coruña, A Coruña. That’s what it’s called officially these days, because that’s its name in the local language. The area, now one of the Spanish semi-selfgoverning regions, is Galicia, and the language is Gallego. It’s linguistically midway between Spanish and Portuguese (Portugal borders the area on one side). I first became aware of it when I drove out of Madrid airport and saw A Coruña on the signs over the highway leading north; at first I thought it was a mistake. But I’ve never heard it spoken because all the Galicians I’ve met, including one who lives on Montreal, were fluently bilingual in their home language and in Spanish. Yet another thoroughly bilingual community.

If you want to stand out as a traditionalist, you can still call it Corunna in English. Google Maps does.

Image   The Roman lighthouse at A Coruña
Posted by translatology at 8:04 AM