The Story of Doktor Dollmann 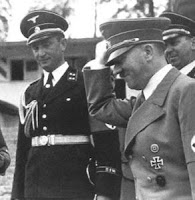 I told this story at Forlì, but I'll repeat it here for a wider audience because it follows appropriately on the post about note-taking.

It comes from the memoirs of one of Hitler's interpreters, Eugen Dollmann, who was his principal Italian interpreter. Dollmann's performance on his first assignment was far from auspicious, but the story has a happy ending – if working for Hitler can be called 'happy'.

In brief, it happened this way. Hitler had come to Italy to visit Mussolini and was to address a meeting of Italian fascist youth. The man who was to interpret for him fell ill suddenly, and the German embassy in Rome was faced with finding a last-minute substitute. So they turned to Dollmann, a German who had been living in Rome for several years and who was known to speak Italian fluently. He was a student of Italian history and art; however, he was not an interpreter. He had neither training nor experience. But he couldn't turn down an assignment for the Führer.

So Dollmann was introduced to Hitler, the youth meeting took place, and at the end of it Hitler made one of his bombastic speeches. Then it was Dollmann's turn. But poor Dollmann, who had no notes to fall back on, couldn't remember a word of what Hitler had said. So in a panic he did what others have done in such a situation: he 'winged it', as interpreters say. He concocted a speech of his own in Italian in the same style as Hitler's, and delivered it with as much conviction as he could muster. At the end of it, to Dollmann's surprise and relief, the young fascists applauded and cheered wildly.

So Dollmann thought his ordeal was over, but no. To his dismay, he was told he would be driving back in Hitler's own car. He got in, wondering whether Hitler realised what had happened, and after a while, sure enough, the Führer said to him sternly, "Herr Doktor, it seems to me you didn't say quite what I said." Dollmann's heart sank into his boots. And then Hitler continued, "But never mind. They liked it."

Not only was that an end to the incident, but Dollman and Hitler hit it off and Dollman, by then an SS officer, continued to interpret for the Führer and Mussolini until the end of the war. By that time, we may suppose, he'd progressed from Native to Expert Interpreter. He even carried out diplomatic missions in Rome. An American who had dealings with him called him "a slippery customer." Not only that, but like Hitler's English interpreter Paul Schmidt (for more, enter schmidt in the Search Box on the right), he escaped prosecution and survived to write his memoirs, which have been an invaluable source for historians.

The story reminds me of what a cynical old conference interpreter once told me early on in my career. He said:

"The worst thing an interpreter can do is to say nothing. Then everybody knows at once that things have gone wrong. If you keep talking but say something the speaker didn't say, only bilingual listeners will notice it. Make it up if necessary. But if you do that, make sure it's something the speaker might have said. Then there's a good chance nobody will notice."

References
Eugen Dollmann. The Interpreter: Memoirs of Doktor Eugen Dollmann. Translated from German by J. Maxwell Brownjohn. London: Hutchinson, 1967.
The above version of the story is a paraphrase from memory, because I don't have my copy of the book with me in Valencia.