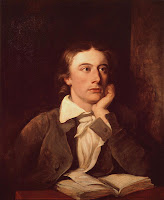 This is an off-topic post for lovers of poetry. Today, 31 October, is the birthday of English Romantic poet John Keats (1795-1821). The post also concerns an English translator, George Chapman (1559-1634), and his translation of Homer.

“Chapman's Iliad and Odyssey are great English epic poems, but they are also two of the liveliest and readable translations of Homer. Chapman's freshness makes the everyday world of nature and the craftsman as vivid as the battlefield and Mount Olympus. His poetry is driven by the excitement of the Renaissance discovery of classical civilisation as at once vital and distant, and is enriched by the perspectives of humanist thought.”

Chapman might not have been a great Greek scholar, but he had one major advantage at the outset: Elizabethan English, the same that contributed to the overwhelming success of the KJV. It was this as much as “the Renaissance discovery of classical civilisation” that enabled him to “speak out loud and bold.”

What follows is, I think, the finest literary tribute in English to a translator. The story goes that

“Chapman's vigorous and earthy paraphrase was put before Keats by Charles Cowden Clarke, a friend from his days as a pupil at a boarding school, in 1816. They sat up together till daylight to read it: ‘Keats shouting with delight as some passage of especial energy struck his imagination.’ At ten o'clock the next morning, Mr. Clarke found the sonnet on his breakfast-table.”


On Looking into Chapman's Homer

Much have I travell’d in the realms of gold,
And many goodly states and kingdoms seen;
Round many western islands have I been
Which bards in fealty to Apollo hold.

Oft of one wide expanse had I been told
That deep-brow'd Homer ruled as his demesne;
Yet did I never breath its pure serene
Till I heard Chapman speak out loud and bold:

Then felt I like some watcher of the skies
When a new planet swims into his ken;
Or like stout Cortez when with his eagle eyes
He star’d at the Pacific – and all his men
Look’d at each other with a wild surmise –
Silent, upon a peak in Darien.

And Chapman? Here's a brief sample:

…and Phœbus heard him pray
And, vext at heart, downe from the tops of steepe heaven stoopt: his bow,
And quiver coverd round, his hands did on his shoulders throw,
And of the angrie deitie the arrowes as he mov’d
Ratl’d about him. Like the night he rang’d the host and rov’d
(Athwart the fleete set) terribly; with his hard-loosing hand
His silver bow twang’d, and his shafts did first the Mules command,
And swift hounds; then the Greekes themselves his deadly arrows shot.
The fires of death went never out. . . .

Homer. Seaven Bookes of the Iliades of Homere, Prince of Poets. Translated according to the Greeke, in judgement of his best Commentaries by George Chapman, Gent[leman]. London: John Windet, 1598. 135 pp., 4º. This isn’t the complete Chapman translation, which didn’t appear until about 1610, but it’s the earliest edition. The copy in the British Library in London bears the autograph of another famous Elizabethan, Ben Jonson, an indication of the attention its publication aroused.

Chapman’s Homer: The Iliad and the Odyssey. Ware, Hertfordshire: Wordsworth Editions. 2000. Available through Amazon from $5.