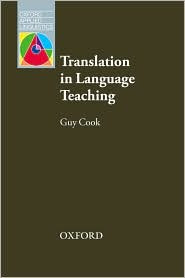 A book that’s making waves in language teaching circles is Guy Cook’s Translation in Language Teaching. Making waves? Well, last year it won the Ben Warren Prize, which is a prized awarded annually by the Ben Warren-International House Trust to an author or authors of an outstanding work in the field of language teacher education.

It’s a sign of the times. The so-called grammar-translation (GT) method was dominant in schools for centuries until World War II, when it was displaced by various applications of the ‘direct method’ (pattern drills, audiovisual learning, etc.) Cook deals with this in his historical introduction, though I don’t agree with him that the influence of private for-profit language schools such as Berlitz was determinant. I myself learnt four languages by GT and then lived through the changeover forcibly as a TESOL teacher in the 1960s. The reasoning behind the change was that (a) we learn our first languages from their use in context and not by studying grammar as such nor by translating, and (b) translating causes interference. These are valid arguments up to a point, and Cook doesn’t recommend returning to the nineteenth century. But now the realisation is dawning that translation can’t be shut out. Teachers who are teaching by the ‘direct method’ slip into using it anyway. Often it’s by far the quickest means for conveying to a student the meaning or the use of a new item in the second language. Then there’s the psychological fact that whatever the method, students are constantly translating to themselves in their own minds. Furthermore – and this is something that’s not emphasised enough – second language learning is hard work and so it needs motivation, and one strong motive for learning another language is in order to be able to translate speech and documents for oneself and for other people. The accent today is on language learning for communication, and translation is needed more and more for communication.

So translation never did die out in language teaching, but it did suffer great opprobrium. And now it seems the pendulum has started to swing. Cook’s conclusion:

“A great deal remains to be done before TILT (Translation in Language Teaching] can be rehabilitated and developed in the way that it deserves. The insidious association of TILT with dull and authoritarian Grammar Translation, combined with the insinuation that Grammar Translation had nothing good in it at all, has lodged itself so deeply in the collective consciousness of the language-teaching profession, that it is difficult to prise it out at all, and it has hardly moved for a hundred years. The result has been an arid period in the use and development of TILT, and serious detriment to language teaching as a whole.”

With all that, the most important statement in the book from our point of view is this: that translating is not only a specialist professional skill but “a major component of bilingual communicative competence.”

For another proponent of translation in language teaching, Richard Vaughan, see the post about him on this blog by entering Vaughan in the Search box on the right.

Posted by translatology at 12:32 PM